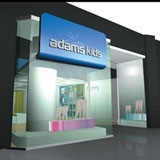 The consultancy was selected last month after a five-way pitch and was briefed to build on the elements already introduced in the trial stores, designed in-house, in Leeds, Leamington Spa and Sheffield. The first, fast-turnaround project opened on Good Friday in Bluewater shopping centre in Kent.

Adams Kids head of in-store marketing Steve Lees confirms the appointment of Inovus Path, but declines to elaborate on the ongoing design strategy that the consultancy will undertake. ‘Inovus Path will be working closely with Adams to produce a store design that builds on earlier developments and is transferable across new and existing stores – a design that engages our customers,’ he says, adding that the Bluewater store ‘is the model for Adams’ ongoing strategy’.

The specialist fashion childrenswear chain has been undertaking a reinvention of the company over the past couple of years. The results of a complete rebranding programme were unveiled in March last year, the fruits of work with Yorkshire brand consultancy Reinvigorate (DW 24 March 2005). The red apple Adams identity was replaced with a blue square marque and the word ‘Kids’ was added.

As part of this ongoing reinvigoration exercise, the company, last month, appointed Principles marketing director Ronny Helvey as its new group marketing director. Helvey has more than 18 years’ experience in retail and fashion marketing, previously as marketing director for Harrods and global head of retail marketing for The Body Shop. ‘Any design strategy [developed by Inovus Path] will support our rebrand and will be led by Helvey,’ says Lees.

Adams Kids chief executive officer Dean Murray says, ‘We are committed to building and enhancing our marketing efforts, and Ronny’s strong track record and in-depth knowledge of the marketing sector is just the combination we’re looking for.’

The Bluewater store is an evolution of the three trial shops that have been trading since the rebrand in March last year. The Inovus Path design includes kids’ play activities and separate changing rooms for boys and girls, and will also introduce the company’s new clothing and accessories ranges.

During the past 18 months, Adams Kids has forged a number of partnerships and now supplies Sainsbury’s with the TU kidswear range, Boots the Chemists with the Mini Mode range and also runs a number of department store concessions.

• Branding by Reinvigorate was launched in March 2005, designed to appeal to mums