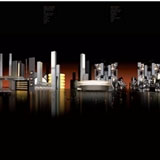 The launch represents a serious play by Flos to crack the architectural lighting market. Flos Architectural’s identity has been developed in collaboration with London consultancy GBH. Meanwhile, Morrison is working on a redesign of the Flos flagship showroom in Milan, as well as developing a street lamp project for the company.

GBH has also designed a vast 3715m2 exhibition space to promote Flos Architectural, which launches at the Light & Building fair, commencing in Frankfurt, Germany, on 23 April. The exhibition theme is based on a ‘city of light’, where lighting products have been positioned to create a skyline to give the feeling of living in a city. The consultancy worked with London photographer David Sykes and Milan architect Fabio Calvi to create the imagery and model-making required for the installation.

This structural theme is also applied in a bumper catalogue designed by GBH for Flos Architectural. It features 3000 pages and 40 individual product dividers. The consultancy began working with Flos in October 2005 and has also developed the marketing and press material for the launch.

‘This is a new look and feel for the brand as the company pushes its capability as an architectural lighting provider as well as a high-design lighting provider,’ says Peter Hale, director at GBH.

Although Flos has produced architectural lighting products before, this new brand marks an alternative direction for the company as it seeks to build on its reputation as a residential and high-design lighting specialist. Last year, Flos acquired a majority holding in the Spanish lighting equipment manufacturer Antares Iluminacion, which has enabled the company to boost its architectural lighting credentials.

It is not yet clear if the Antares brand will be phased out completely.