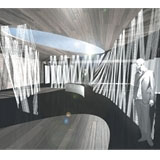 Fashion retailer Reiss has confirmed it is to open up to five outlets in China and Hong Kong next year, with a concept store design developed by London-based Draw Associates.

The shops will open at locations yet to be confirmed in Hong Kong, Beijing and Shanghai, and form part of the fashion retailer’s ambitious global expansion plan to break into the Far East market. Reiss aims to open 20 stores in China over the next four years, says a company spokeswoman.

The details of the interior design concepts by Draw, which also trades as D-Raw, are yet to be revealed, but the overall store design is likely to reflect the creative direction of previous schemes, which often fuse different materials, graphic overlays and bespoke lighting systems, to create unique shopping environments.

‘At each store there will be an evolution, with Draw Associates taking the lead,’ says the Reiss spokeswoman.

Reiss is also opening international outlets in San Francisco, Boston, New York, and Stockholm, with hopes to expand its presence in the Gulf region with the launch of up to four more sites.

The site in Stockholm, due to open next month, features an LED-illuminated ‘chandelier’, created by lighting designer Jason Bruges. Made up from a series of glass rods, the structure is programmed digitally to project shapes and shadows across the store, to entice shoppers to explore the retail space.

Meanwhile, Draw is also designing a £25m UK flagship store for Reiss, scheduled to open in two years’ time, at the former London College of Fashion building, located on Barrett Street. A further three London stores are scheduled to open this year.

David Reiss founded the company as a menswear retailer in the 1970s, diversifying into womenswear six years ago. Draw has worked with the retailer since the 1990s.