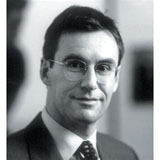 The UK’s first low-fare, all business class long-haul airline will launch later this year, with naming and positioning by strategy and marketing consultancy Promise and creative work by Peter Stimpson.

Called Silverjet, the airline will offer only business class with flatbed seating and will fly to New York twice daily from the private jet terminal at Luton Airport. The company is primarily targeting a business audience. According to Promise director Charles Trevail, the company’s name is deliberately chosen to sound ‘conventional – the kind of name a business person would be happy to say’.

‘We discounted low cost names such as Whizz or Buzz because they sound a bit here today, gone tomorrow,’ adds Trevail. ‘We were looking for a degree of gravitas and a sense that it has been around for some time.’

Promise is working with Stimpson, a former FutureBrand creative consultant, who will act as creative director on the project, lining up a larger design team.

Work is yet to begin on a marque and livery, but Trevail says creative will communicate cues of ‘longevity and prestige’ and is likely to launch in the summer. ‘The key thing with an airline is trust and the idea is to deliver a private jet feel,’ he says.

Silverjet expects to commence services within six months and aims to have a fleet of ten aircraft within three years. It also hopes to add further routes over time. The initial average return fare for London to New York is expected to be £999.