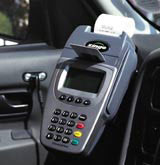 You can’t help thinking of Zingo as a dotcom that wasn’t. Had the black-cab-by-mobile-phone service arrived three or four years ago, instead of during the worst bear market for decades, its initial public offering might have caused a bunfight in the City. A technology company with a catchy brand, gadgets that work and bricks-and-mortar backing – it could have been a case of name your share price for its parent, taxi manufacturer Manganese Bronze.

But marketing manager Jason Cross is glad things weren’t ever thus. ‘Maybe we would have been swept up and dashed on the rocks of a fever that was actually nothing to do with us,’ he says. ‘We’ve learnt from what’s happened over the past two or three years.’

Although he promises a promotional ‘bang’ when the brand launches to Londoners in April, Cross is quietly, unassumingly confident about a system that could revolutionise the way cabs are hailed in the capital.

‘Passengers are just waiting for this to happen,’ he maintains. ‘Feedback from our trialists has been incredibly positive. We only e-mailed a couple of hundred people to invite them to test the concept, but a couple of thousand registered their interest, even though we said we can’t promise you a journey every time.’

The premise is blindingly obvious to anyone who’s staggered out of a bar a bit worse for wear on a rainy night: Rather than floundering around on the street for a black cab, order one by speaking directly to the nearest available driver as you enjoy your final vodka tonic.

‘Why shouldn’t you be able to phone a number and use 21st century technology to bring that cab directly to you? That’s the customer proposition,’ Cross explains. ‘We didn’t want to go down the route of overcomplicating it, or using technology for technology’s sake. The idea had to be intuitive and the simplest thing you can do is make a phone call. There’s no techno-fear involved.’

Brand development to date has been unfussy and deliberately low-key. Birmingham-based Talisman created the Zingo logo and the UK office of US group Master-McNeil came up with the name. Then, when it became clear the service would debut in London, not the Midlands where Manganese Bronze first mooted the concept, Cross brought Greenwich-based G2 on board (DW 16 January).

For a brand that plans to become a household name among its target audience, Zingo is yet to make a significant noise. ‘We want to keep the powder dry for as long as possible, so that when we do launch we have a bit of a pop to go with it, and then the tail of marketing activity behind,’ says Cross.

His main priority so far has been signing up cabbies – a notoriously single-minded bunch – with the aim of having 1500-2000 ready for launch. Relationships with the four major mobile phone operators are also progressing, while the first batch of ‘live’ Zingo cabs is being fitted this week. Handy timing, given the introduction of congestion charges on Monday – officially registered taxis are, of course, exempt.

On one occasion during our interview, Cross uses the word Zingo as a verb. Michael Wolff, who often says doing that meaningfully is the hallmark of an effective brand, would be proud. But generally Cross seems keen to let the product do the talking. It’s as if, although he grew up with brands and marketing (‘Dad was an ad agency account director; we’d go on shoots for Woolworth’s Christmas campaigns’), familiarity has bred common sense.

Branding and design have to reflect the simplicity and immediacy of Zingo’s offer, he says. Anything that gets in the way of that could annoy a prospective passenger, which is why ‘the voice of Zingo is probably the most common touchpoint’.

To grasp what he means, you have to understand the science part. Zingo employs cellular technology from mobile phone companies to locate passengers and GPS transmitters to find the nearest taxi. As a customer, your call to a single, low-cost number is patched through to the driver who will pick you up. Zingo adds a flat rate £1.40 to the meter fare.

‘The recorded welcome message is a delaying tactic while we do the clever stuff,’ says Cross. ‘The person we’ve used is actually the daughter of a cab driver. She’s grown up with the trade, but works in television and does voiceovers the whole time. Her voice isn’t received pronunciation or BBC English, but it’s not cockney either. There’s a hint of a London accent, but it’s friendly, relaxed and understandable across wide groups of people without jarring. It would be very easy to go down the cockney route and feel forced.’

There’s something very thorough about Cross’s approach. Perhaps his yeoman qualities are the result of several years with BT in the 1990s, where he worked on multimedia kiosks, street payphones and burglar alarms. It was at the telecoms giant that he first met G2 partners Grant Smith and Graham Spice, then with Raymond Loewy International.

For all the methodical build-up, much is riding on Zingo being successful in London. Demand for Manganese Bronze vehicles is down and the company needs another revenue stream, not least with former chairman Jamie Borwick offering to take it into private ownership.

Cross is aware of the potential to extend Zingo to other cities, both nationally and globally. A somewhat accidental advocate of technology (‘That’s been the focus from day one; I don’t know why, I wouldn’t say I’m particularly techy’), he knows he must soon shift the brand through its gears.

Springetts has its day at the races