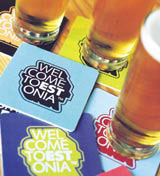 These days the US has an image problem. Too many people in too many places don’t look on Uncle Sam as kind and benevolent.

Even the luring of advertising executive Charlotte Beers to become the US’s under-secretary of state for public diplomacy and public affairs hasn’t succeeded in its intent. Her brief was to persuade the sceptics, particularly those in Muslim countries, that the American brand is a force for good.

Her many tasks have included ‘rebranding’ Osama Bin Laden as a mass murderer to millions of Muslims, creating a poster campaign with a reward on information on the world’s most wanted man and arguing the case for a war against Iraq.

But as 1.5 million anti-war demonstrators marching last Saturday in London proved, nobody is buying America’s spin on the world’s events. Somewhere along the lines, the US has failed to translate its skill at creating and selling commercial brands to the country itself, which has traditionally stood for freedom, tolerance and opportunity.

Yet there is little doubt that the power of country branding has long been acknowledged. As the economic power of such brands is appreciated, the process is conscious and deliberate.

In September 2002, Interbrand created a new brand identity for Estonia, intended to strengthen its image to boost tourism, increase its exports and promote its application for European Union membership. ‘We talked about it as a brand, but it’s really about finding five or six genuinely interesting things about Estonia and communicating those,’ says Marksteen Adamson, ex-Interbrand international creative director.

As a small country, Estonia needs to harmonise the messages it sends out to ensure all its communications contain similar themes. ‘Estonia has about four minutes on the world stage in an average year,’ he says. ‘When you’re talking to the world you need to be saying the same things.’ Interbrand created a country brand icon that can be used by all and sundry.

In a similar move, the Al-Ain, a city in the United Arab Emirates, has hired Landor Associates to work on its branding strategy. What started as a simple design brief for the Al-Ain Economic Development and Tourism Authority has rapidly broadened to encompass strategy with the new brand taking pole position in the city’s bid to raise its profile. The plan is set to be unveiled in the first half of next year.

‘The brand that we develop has to work across all areas, primarily investment trade and tourism, but health and education are also key sectors for the city,’ explains Eissa Khoury, client manager: business development in Landor’s Dubai office.

On a bigger scale, Wolff Olins has been engaged in a long-term project looking at the German brand. Launched in conjunction with management consultancy Accenture, PR company ECC Kohtes Klewes, the Goethe Institute and a range of media partners, the aim of the DEbatte project is to make politicians and business understand that ‘the German brand is out of synch with its challenges’.

Wolff Olins European new business director Claudius Koenig says the importance of the national brand is emphasised by the fact that many of the values of the country’s most important car brands, for example, are closely associated with perceived national qualities.

Wolff Olins presented the manifesto for the new Spielmaker or game-maker brand in Berlin. The aim is to produce a country that is courageous, innovative, willing to take risks and self-confident, while at the same time retaining traditional values such as quality, top performance and reliability. ‘It’s the motivator to get Germany moving into a less structured, more forward-looking type brand,’ he says.

Many nation-branding or destination-branding projects are aspirational, as much a statement about what the country would like to be as what it is now. ‘A lot of it is just showing what already exists,’ says Adamson of the Estonia project. ‘We’ve created posts in the distance to move toward. It is a kind of helping hand to get them to where they want to go.’

To be convincing, there has to be signs of progress and this can involve elements over which a consultancy has little or no control. ‘It has to have the right investment framework. It’s got to get the right legislation into place,’ says Khoury of the challenges facing Al-Ain.

But in this case the client has the power to put these facets of the strategy in place. ‘We are lucky that Al-Ain has lots of money. When we talk about aspirations, it’s not just pipe dreams.’

While short-term projects may have a huge impact, creating or changing an established nation brand is a long-term project. In Germany there’s been no client in the traditional sense of the word. Instead, the participants have used DEbatte as a means of creating awareness of branding and their own business. This lack of short-term goals has allowed the project to build its own momentum. ‘The aim is to find Spielmakers, to realise in their own companies, in their own political parties or in themselves, the idea of the Spielmaker brand,’ says Koenig.

Four years after the project first launched, the government department responsible for attracting foreign investment is, he claims, looking to drop its numbers-focused language for a branding message. ‘It’s looking to adopt some of our results and views on how Germany will gain more foreign investment by rebranding,’ he says.

With the US so dominant, Beers’ brief to change perceptions of the American brand will also require long-term thinking. And with lots of US companies using Americana as a key element in their brand values, the state must reclaim some of those values from commerce.

Consultant Jeremy Faro, who worked on Interbrand’s Estonia project, says the task will be made much harder by the vast number of voices providing messages about the US. While this provides many vehicles for disseminating any brand message, producing a coherent message will be very difficult. ‘You can’t really manage a brand as large as the US,’ he warns.