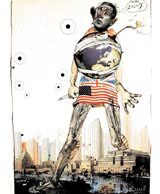 Over a million Britons marched last Saturday in the cause of peace. A number, say organisers, that qualifies this anti-war demonstration as a peace movement. But this movement, unlike the anti-establishment peace protests of the 1960s and the politically driven labour protests of the 1970s, encompasses people of all ages and political persuasions.

Saturday’s march saw bemused Socialist and Communist Party members trying to leaflet middle-aged women too busy doling out sandwiches and pointing out London landmarks to notice them. Grannies Against War banners walked side by side with Sex Workers of the World Unite, Quakers for Peace and Croydon CND.

Among the mass-produced placards, the David Gentleman-designed No poster added a designer touch. Most who carried the Daily Mirror’s No War bills ripped the branding from it – showing that in corporate Britain there are some events it isn’t possible to sponsor. But it was Karmarama’s Make Tea Not War billet that best represented the middle-England spirit of the day.

Art and design have long been associated with political causes – Picasso’s Guernica considered by many as a seminal peace painting and the student staple, Alberto Korda’s Che Guevera picture, another high-profile example. But as the Peace movement takes on such a different form in 2003, designers and photographers have yet to play a part in shaping its direction, its flavour and its hold on the public imagination.

Some have begun to make a public stand. No-war-on-Iraq, a group which claims to ‘bring artists expressions into the anti-war movement’, ran a series of advertisements prior to last week’s march and are holding a fundraising event, Not In Our Name, at London’s city hall on Sunday. With a Ralph Steadman illustration acting as a logo and Voodoo Creative-designed invitations and leaflets, the group could herald a change in the style of anti-war literature.

Voodoo Creative art director Kat Croll claims the work is ‘a move away from the Socialist Worker-style [designs] prevalent in the anti-war campaign’. Yet the design retains a politicised style, which many of those marching on Saturday would not relate to. And it’s questionable whether the advertisement, essentially a roll call of the great and the good, acts as an impetus to the general population or simply a boost to participants’ ego.

Alan Kitching’s trademark letterpress typography poster for the Richard Rogers-inspired protest group, achieved standout in The Guardian last Friday. The antithesis of the optimism and naivety of the 1960s peace movement’s flower child psychedelia, it is a sign perhaps of our increasingly cynical and disillusioned age.

The message is also loud, clear and direct, at the Fuck Your War exhibition. Billed as ‘the opportunity to relocate art into the political domain’, it houses work by Tinka Godron, Eric Blackburn, Alexandra Hagen, James Perry, Catherina Barich, Stephen Reed and Russell Martin.

As the call for peace moves on and the British public throws off its apathy and returns to the political fray, it will be interesting to see if designers and artists respond to the call and deliver work that breaks with traditions of the past to reflect the spirit of today. Work which in future might be considered as the anti-war polemic of the early 21st century.