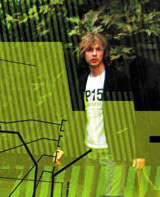 The latest screen-based medium for smart graphic designers looking for new outlets for creativity – and opportunities for work – is the DVD. The Digital Versatile Disc is one of the few entertainment industry success stories of recent years. While record companies and film studios struggle to dissuade us from downloading unpaid for music and movies, we don’t seem to need much persuading to buy DVDs. The shiny discs with their superior sound and image quality, and their slimline packaging (which is so much more attractive than VHS), have led us to open our wallets with universal enthusiasm.

Yet when it comes to on-screen design, DVDs are usually pedestrian. Most DVDs have a rather clumsy-looking menu placed over a Photoshopped still image; the interface is crude and the packaging graphics are formulaic. If DVD is going to be a viable, long-term competitor to television, the medium’s on-screen look has to be as slick and beguiling as that of the best TV channels. Currently, it rarely is.

One of the more spectacular examples of graphic designers moving into DVD is Airside’s work for the Lemon Jelly album ’64-’95, to be released by XL Recordings on 31 January (DW 2 December 2004). Famous for its vector-based illustrations, high-style websites and moving image work, Airside’s relationship with Lemon Jelly is well documented. Band member Fred Deakin is a director and founder of Airside, and the London-based design group has designed the packaging for all the band’s releases, created its website, as well as producing some outstanding music videos.

’64-’95 is a simultaneous DVD and CD release. For the DVD version, Airside has created animation to accompany each track. I asked Airside director Nat Hunter how the group went about generating so much content. ‘We listened to the album a lot,’ she explains, ‘and set ourselves a brief. There had to be an overall unity to the disc, but each of the nine visuals had to be as different from each other as possible, and each visual had to have a narrative structure, however obscure.’ The designers have cleverly restricted much of their animation to geometric patterns endlessly reconfiguring in space. They have avoided frenetic optical effects and were not afraid of using repetition. While viewers might struggle to find narrative threads in all the nine pieces, Airside has created a compelling and dreamy visual accompaniment to Lemon Jelly’s trippy, largely instrumental nocturnal sounds.

‘We had a small budget,’ Hunter notes, ‘and only three months to do 53 minutes of animation, the interface and the packaging. The entire DVD had the same budget as a 30-second ad for TV. Because of time and budgetary limitations we were forced to make visuals that lie somewhere between club visuals and a normal music promo. It’s a whole new concept. We are hoping that people will choose to buy the Lemon Jelly album on DVD rather than CD.’

I asked her if there are any limitations to designing for DVD. ‘The normal DVD compression is perfect for live action,’ notes Hunter, ‘but less good for animation – it can suffer from jagged edges. For instance, it’s not quite good enough quality to show in a cinema, which is a shame.’ I then asked how DVD design differs from CD-ROM design. ‘If we’d been designing a CD-ROM,’ she explains, ‘we would have had to have much more interaction, whereas with a DVD it’s fine to have a linear experience, as people are used to watching films on DVD. As a designer, you have to consider the end experience first. DVDs will, on the whole, be set up for home viewing from the sofa with your mates, whereas CD-ROMs are designed for one user sitting in front of a computer.’

Airside may be a DVD virgin, but London-based studio D-Fuse, known for its complex and enveloping club visuals, is a seasoned DVD producer. It has already made three discs for the Japanese digital film market, one of which was seen by slacker generation hero Beck. ‘Beck is fascinated with Japan,’ says Mike Faulkner of D-Fuse, ‘and while he was there he brought a bunch of DVDs, including our D-Tonate DVD. He loved our movies, but considered our work more suited to electronic music than to his. But while he was playing his new album he ran our DVD, and found that almost all our visuals synced with his tracks.’

When D-Fuse got a call to say that Beck was interested in commissioning DVD visuals for his new album the group was sceptical. ‘We were not familiar with Beck’s material,’ says Faulkner, ‘and initially we thought it wouldn’t work. But in the end it worked really well. To start with, we were asked to produce four to six tracks, but because of the speed of our production we were given the task to produce the whole album. The budget was lower than expected, but this balanced out as we had complete creative freedom. The only person with input was Beck and he was happy with everything we did.’

But Faulkner has reservations about the format. ‘DVDs are rather limited,’ he notes. ‘We are interested in pushing the format to the limit, but we’re more interested in the fact that graphic design has migrated into moving images and film-making. For us, it’s got more to do with the processing power of computers opening up many new areas for graphic designers. That’s what’s so interesting.’

There is certainly plenty of scope for graphic designers to improve the on-screen look and functionality of DVDs. Like every worthwhile medium, the DVD requires its own aesthetic approach. But as Airside and D-Fuse have shown, when you get it right, when you turn the limitations into benefits, the results can be exhilarating.

Design buying at RHM under review