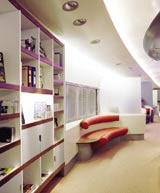 Airbus this week unveils the world’s largest commercial passenger aircraft, the 555-seat, double-decker A380. Designated as a ‘flagship of the 21st century’ for passenger flight, the £150m vehicles feature first-class cabin interiors designed by Priestman Goode.

According to consultancy founder Paul Priestman, the group is working on a number of additional A380 projects for a range of airlines.

The first class interiors were created for a mock-up of the A380 in 2000. In producing the design, Priestman says he aimed to explore the ‘possibilities and advantages of the unique and very large’ aircraft. ‘Standing at apron level looking up at this aircraft is quite astonishing. It is one hell of a big machine and has to be seen to be believed,’ he adds.

Airbus has so far received orders for 139 of the A380 ‘superjumbo’ jets, from airlines including Air France, Emirates, Lufthansa, Singapore Airlines and Virgin Atlantic Airways.

The company says the craft offers the ability to carry larger numbers of people on long haul trips, without the need to open up more slots in the flying schedule.

Design needs showcases as much as architecture