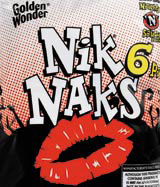 Bristol design consultancy Taxi Studio has created a ‘naughty’ Valentine’s Day crisp packet design for Nik Naks. It is the consultancy’s first project for brand owner Golden Wonder and is worth a five-figure fee.

The love-inspired crisps, which will have a special dose of ginseng flavouring, could raise more than a few eyebrows, says consultancy creative director Spencer Buck.

‘We’ve illustrated the pack with a rather naughty scene, showing clothing and underwear flying everywhere. Nik Naks packs normally feature an illustration on the back, so we have done something suggestive with that too,’ he says.

Buck says the design is intended to be provocative, so the strapline ‘lick the stick’ has been added and in place of the recycle information are the words ‘chuck ya muck – keep Britain randy’.

Taxi has created six-pack and individual pack designs, which will go into stores next week for a two- month period. The group was appointed in September 2004.