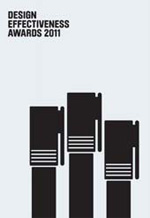 The Design Business Association has appointed B&W Studio to design the identity and collateral for the 2012 DBA Design Effectiveness Awards, which recognise design’s role in business growth.

The consultancy was appointed last week without a pitch on the strength of its work on the 2011 identity (pictured).

Steven Wills, creative director of B&W Studio, says, ’We’re very conscious we want the same results as 2011, as it got a lot of entries, but we want to do something different.’

The project involves designing the awards’ identity and all related collateral, including ads, the winners book, tickets, seating plans and on-screen event graphics.
Wills adds, ’We have to find the balance between design and business in terms of the look and feel.’

The 2011 identity will finish rolling out at the awards event on 17 February and work will begin on the 2012 Awards next week.

The culture of ideas