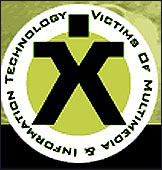 Multimedia wrecks lives – and the visual proof is now on-line for all to see in the shape of www.fifth-dimension.com/ warning. In case you ever doubted it, the Victims of Multimedia and Information Technology action group has been set up to combat Cyber Stress Syndrome.

The symptoms of CSS have apparently been ‘recognised for decades, but have mostly been attributed to laziness, stupidity, greed, lack of self-motivation, delusions of grandeur, drug abuse, or promiscuity’, while the condition itself has gone virtually unnoticed. Only one solution remains, suggests Fifth Dimension: hard cash donations towards research.