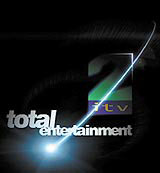 ITV2 has redesigned its logo and on-air presentation style and look for the first time since it launched 18 months ago.

The new design, created in-house by ITV’s Network Promotions Unit, is being introduced via a four-month ad campaign aimed at repositioning ITV2 as a general entertainment channel. Eight different advertisements, produced by new production company Jam, have also been created.

The ITV2 logo hasn’t changed, but the tagline Total Entertainment has been added into the existing logo.

Mintel says on-line sales on the up