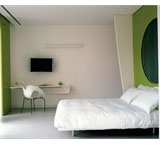 Aspirational yet transient, hotels are the perfect places for designers to show off their skills. Bethan Ryder gets a sneak preview of two contrasting projects by Ron Arad and David Collins

When last year’s headline-grabbing £52m design blockbuster the Hotel Puerta America opened in Madrid, it seemed our obsession with the boutique hotel had reached fever pitch. For some, such as Ian Schrager, lauded for igniting the phenomenon with the launch of New York’s Morgans Hotel in 1984, it signalled the end. ‘No taste, no style, no idea,’ he railed.

Nevertheless, the Hotel Puerta America allowed many designers to flex their wings in the realm of hotel design, with widely different interpretations. Far from marking the demise of the designer hotel, it could well be the springboard for more. Interest and innovation by heavyweight architects and designers in this area, and the extension into residential condominiums and serviced apartments looks set to run and run.

Ron Arad designed the seventh floor of the Hotel Puerta America and now, one year on, he has completed the €10m (£6.9m) renovation of a 41-room hotel in Rimini, Italy, due to open this autumn. It features several show-stopping elements, not least the bronze skin that wraps around the existing façade and bends inwards and down to form the roof and banquette of the ground floor bar.

To create ‘the best hotel in Rimini or the best hotel in Italy’ was the ambitious brief. Arad’s challenge was to fulfil these ambitions without overloading the scheme, and the result blends a few beautifully executed and sculptural bold ideas. Arad believes what’s paramount in hotel design ‘is not to try to create a home from home, but to create a different experience when you’re in a hotel. What’s paramount with everything we do in our practice is to try to design things as if they’ve been designed for the first time, so it’s not just another reception design or bar’. 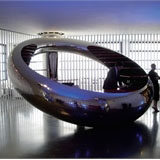 Rooms are pared down and all white with lime accents. Corian bathroom pods form the backdrop to the sleeping area, a huge porthole window between the two allowing natural light to flow into the bathrooms. Arad’s approach is unashamedly architectural. ‘Generally, we’re not into pattern and decoration – we think that the objects, the surfaces and the spaces speak for themselves,’ he says. Judging by the preliminary drawings of his hotel project Upperworld, at the Battersea Power Station development, Arad’s future hotel designs – which include a new-build Swarovski Hotel near Innsbruck in Austria – are destined to be equally organic and ambitious in form.

David Collins Studio’s first hotel project, the mammoth 540-room The London NYC (formerly the Rihga Royal) in midtown Manhattan, couldn’t be more different. The application of considered interior design, rather than an architectural statement makes David Collins’s approach the polar opposite to Ron Arad’s. ‘Essentially, a hotel has got to be a home from home,’ says Collins, ‘and in the current design aesthetic, this has got to be aspirational – a little less homely, but at the same time not too alien.’

Due to open in the autumn, The London NYC will include Gordon Ramsay’s first New York restaurant. ‘The London aspect comes from the service and the subliminal extras, rather than overt design,’ explains Collins, ‘although we have used references to London in the abstract form with amazing embroidered wallpaper panels, which we have commissioned for the entrance hall.’ 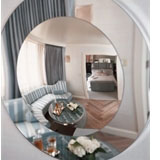 A sneak preview of two completed guestrooms in light platinum and gold colour palettes reveal a refined elegance. Vast and light, they’re a breath of fresh air in a city where guestrooms are typically minute and often lacking in natural light. ‘This is a result of a lot of heart-searching and experimenting with fabrics,’ says Collins. ‘The aspect of the hotel doesn’t get a lot of light, especially on the lower floors, so we had to make the most of the light by using reflective fabrics.’

Limed oak parquet floors and beautifully crafted bespoke timber furniture lend a clean, contemporary feel. Likely to appeal equally to men and women, flamboyant wall-coverings behind the ‘open’ closets and matching laminated surfaces of the mini-bars (Collins’s personal favourite detail, because it’s ‘quirky and eccentric – again, a subliminal English reference’) are finely balanced by a simple desk and bedside fittings. Luxurious and classic in feel, without being remotely cluttered or cloying, it’s a subtle reinvention of the Manhattan guestroom, but also a stark contrast to Arad’s brave new world of hotel design.