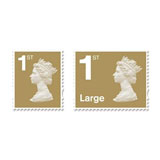 The design of the classic first and second class stamp is to be relaunched by Royal Mail, Design Week can reveal, with a radical overhaul by CDT Design.

It marks the first major change in the look of the iconic British stamp for almost 40 years and has been prompted by the changes in the postal charging system, which come into place on 1 August. From this time, the cost of posting a letter will be based on size as well as weight.

The redesign will also make both classes of stamp more user-friendly for people with disabilities and visual impediments. Mike Dempsey, chairman of CDT, has been overseeing what he describes as a particularly ‘large-scale design project’.

Stamps specifically for larger-sized envelopes have also been designed to be twice the current width of a standard stamp, and will feature the word ‘large’ printed on their face in Akzidenz-Grotesk .

The Queen’s head has been retained, but reduced in size, to enable the value of each stamp to be emphasised with larger numerals.

This is to aid with differentiation and to help users to distinguish the stamps, Dempsey explains. The stamps are set to come into use from the start of next month.

Following on from this, airmail and worldwide stamps will also be looked at by the design consultancy, in order to bring them into line with the new look.

‘A roll out of the new design across other areas will follow trials, but nothing has been printed yet. We need to launch this scheme first,’ says Dempsey.

The redesign marks the culmination of a project first embarked upon five years ago, when Dempsey helped redesign the Royal Mail cover booklets to better aid customers with disabilities to use the stamps. He was commissioned by Royal Mail’s then head of design, Barry Robinson to look at the design of self-adhesive stamps and their packaging.

‘This brings a complementary look, at last, to the stamps. We wanted to create an instant and clear design for the stamps across the board. The design is very simple, modern and bolder,’ says Dempsey.

• Numerals to be larger on both stamps

• Queen’s head retained but made smaller to create space

• To reflect new Royal Mail pricing in proportion scheme, which come into place on 1 August

• To create differentiation and help users with disabilities

• Culmination of CDT project first embarked upon five years ago