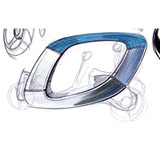 The findings lay down a framework for the coming 40 years and have the long-term goal of cutting back the UK’s carbon dioxide emissions by 60 per cent by 2050. The Government hopes to phase out energy-wasteful domestic appliances and consumer electronics through incentivising manufacturers and retailers to produce more energy-efficient products. This could involve ‘designing-out’ energy wasteful elements on items such as stand-by buttons.

An industry-wide consultation to decide the incentives will begin next year, confirms a Department of Trade and Industry spokeswoman. The Government will also continue to plough money into research and development and the ‘newer, less viable technologies,’ says energy minister Malcom Wicks.

This energy policy is likely to invigorate innovation in the design industry, bolstering the growing consumer demand for alternative, more environmentally friendly products. The move to adopt a low-carbon economy comes as design is increasingly being used to address environmental concerns.

This week, for example, London is set to receive its first solar-powered boat, designed by Christoph Behling, founder of SolarLab Research and Design. The shuttle will launch at the Serpentine lake in Hyde Park on 18 July. It measures 14.5m in length and will carry up to 40 passengers by way of an electric engine. The boat, featuring 27 curved glass-modules to ‘collect’ the sun’s energy, will be silent, carbon-neutral and pollution-free. Behling hopes to turn the shuttle into a ‘floating classroom’ and envisages hosting a series of educational programmes on it to teach children about the importance of solar power. With its sculptural, open-air design, the boat is likely to become a noteworthy statement about the plausibility of alternative energy products.

Next year London is also set to receive its first solar-hydrogen train, installed at Battersea Park and designed by Behling. The technology is still being developed, he says. Meanwhile, Behling is also working up concepts for a series of solar-cab rickshaws for London, which are being designed to reduce carbon dioxide emissions in the city by up to two tons per vehicle per year, compared to a diesel fuelled vehicle of a similar size.

‘People have definitely woken up to the possibility of alternative energy products, but there is nothing you can really buy here, the offer is still fairly limited and the UK is a little behind the rest of Europe. However there is potential and a definite interest,’ explains Behling. 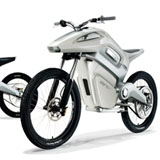 Seymour Powell’s purpose-built hydrogen fuel-cell bike, Emissions Neutral Vehicle, is currently being refined by the consultancy with the ambition to create a road-worthy model. Seymour Powell is investigating ways to make the product recyclable, and the technology system continues to be tweaked by its manufacturers, Intelligent Energy. The bike, dubbed ENV, picked up a gold gong at this year’s Idea Awards.

Seymour Powell director Nick Talbot agrees that the consumer attitude is changing, but warns that projects can often be ‘modified and screwed down to cost’.

‘The more informed the design community is, the bigger the opportunity to engage clients,’ he says.

• Commits to boosting renewable investments to give more support to emerging technologies, such as offshore wind, wave and tidal projects