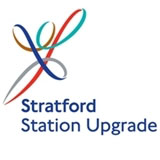 Minale Tattersfield has designed a visual identity for Stratford station, one of Transport for London’s busiest interchanges outside of central London and a key transport hub for the coming London 2012 Olympics.

As part of east London’s preparations for the 2012 Games, Stratford station is undergoing a major redevelopment, with a plan drawn up by design and engineering consultancy Jacobs Babtie.

The visual identity will appear on all posters, hoardings and stationery, to promote the redevelopment project to both stakeholders and passengers.

The coloured strands of the logo reflect the five rail lines that meet at the interchange, according to Minale Tattersfield’s new business manager Claire Lowson.

‘We presented an original logo with five interconnecting components and this was evolved into a leaping human figure, with an illustrator introducing more dynamism into the logo,’ she explains.

TfL expects an additional 63 000 passengers to use Stratford Station in the peak morning period during the Olympic Games. The renovations will include a temporary Olympic bridge, new lifts and wider platforms.

As part of the two-dimensional arm of TfL’s design roster, Minale Tattersfield is also working on bus liveries for the forthcoming East London Transit system and on branding for the Freight Operators Recognition Scheme.