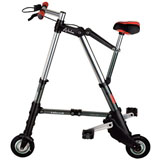 In an interview with Design Week, unveiling his latest creation – the A-Bike – Sinclair revealed he is currently designing other bicycles that employ new materials, such as injection-moulded composites that are lighter than aluminium.

He also hopes to ‘get back into computers’, though this is unlikely to be in the immediate future.

His latest product, the folding A-Bike, weighs 5.7kg, has tiny 15cm wheels and an ingenious double chain system, concealed in a case to ensure clean trouser-legs.

Sinclair refuses to speculate on its likely sales. ‘I’m not making any guesses on numbers as I always get it wrong’, he says, but believes it will appeal to women because of its hidden chain.

In a fillip to British manufacturing, Sinclair also says that if the A-Bike is successful he would like to shift its manufacture from Malaysia back to the UK. ‘I’d like to see us go back to manufacturing in this country. It’s very time consuming to develop a new product and there is inevitably a lot of unravelling of problems and learning to be done. All that would be much easier if manufacture was based in the UK,’ he says.