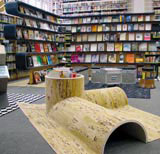 The Book Corner, the British Council’s touring publicationdesign exhibition, is making a month-long appearance in London, following its launch at the Milan Furniture Fair, before continuing its journey. It seems at first a strange choice for Milan, which in terms of high-budget installations and glam events is becoming increasingly disco. The Book Corner, by contrast, is deliberately quiet and modest in scale, requiring the visitor to delve and browse rather than just look and tick.

Curated by Emily King, it is designed by Martin Gamper, whose recent furniture explored utilising the corners of a room. His design is deliberately cosy and is based around a corner book case, its curving grey velvet shelves dotted with brass numerals corresponding to the number of the book displayed. Gamper has also designed a corner seat covered in wood plank-effect carpet with a tree stump base to house children’s books and customised library stools with squashy upholstered seats to create ideal reading perches.

The books on show themselves are predominantly art and design volumes from independent publishers such as Book Works and August. King wanted to gather material from less obvious publishers, but was disappointed with what she found, especially the ‘paucity of paperback design’. The team (King, Gamper, Ã…bÃ¤ke and the British Council’s Sorrel Hershberg) chose books which met one of King’s four criteria: bookish books designed with literary conventions in mind; books that act as documents largely of art works or photography; ‘the graphic statement’; and finally ‘production extravaganza’. Gamper developed a computerised cataloguing system which provided data on each book as well as comments on 50 key books.

Graphics specialist Ã…bÃ¤ke is known for its beautiful and highly decorative illustrative work and slightly annoying typefaces (in this case ‘Shelvectica’, so named because the letter sizes are uneven like books on a shelf). It has designed book plates as well as an envelope printed with a short essay, created to hold photocopies of pages that have caught visitors’ imaginations. Visitors are also encouraged to leave bookmarks to highlight pages others might also enjoy, created from colour separations left over from the printing. It is this attention to detail that makes this travelling library so engaging, more so than many of the books selected.

These range from the luscious, such as Violette Edition’s Sophie Calle Double Game, to the desirable fare of Magma including King’s personal favourite, Graphic Thought Facility’s own publication, Bitsworld. Quiet books such as Derek Birdsall’s redesign of the Book of Common Worship sit alongside surprisingly populist inclusions such as Nigel Slater’s cookery book Appetite, selected, King says, for its photographs. The Book Corner show is worth seeing for its bibliophilist care and because it gives British designers the rare chance to see how they are portrayed and promoted abroad.

In an ideal world, all British Council exhibitions would be seen in the UK, given the effort and talent involved. Its venues for design shows often read like a list of Eurovision Song contenders; central European states which are seemingly unlikely clients for British design. Though they deserve to be included it is good to see that after an outing to Tallin, the show will tour major book fairs including Helsinki in October. Here it might reach audiences which should be working with the UK design talent on display for mainstream publications, where they’re so sorely needed.