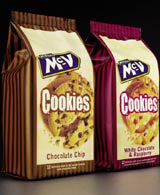 Design Bridge has created packaging for McV Cookies from McVitie’s. The products go on-shelf over the next few weeks and target a category traditionally dominated by American-styled offerings such as Maryland in-store bakery products and franchises like Millie’s Cookies.

Consumers expect cookie products to have a ‘home-made’ look, with an irregular texture and chunky ‘inclusions’, says Design Bridge account director Andrea Paul, and it was important the design signalled these cues.

She adds, ‘We needed to pull the design apart from everyday biscuits. [The product] is positioned as something a little special and more indulgent.’

The design had to focus on the ‘baking heritage’ of cookies, while providing a point of difference from the ‘stars and stripes’ branding on the American-themed products, she says.

A cream background was chosen for its connotations with baking and the stripes and upright format are intended to communicate the home-made image along with the crumbly Cookies identity.

Design Bridge design director Lee Cook led the project creatively and the consultancy began working on the brief in December 2001.

Design Bridge was appointed without a pitch following its work on McVitie’s brand revamp.

Taking a Lotto on

Restaurant should have used its noodle over trademark