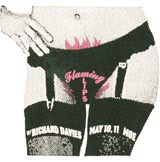 ‘Art Chantry works in Seattle and over the past 25 years has produced a body of work amounting to over 3000 posters, 5000 logos (mainly for rock bands) and 500 record covers, not to mention numerous music magazines he’s art directed.

Chantry is the master of low-tech design, preferring a black and white photocopier to produce his work rather than a computer, which suits his style of collage. Most of the imagery in his work is clip-art or magazines from the 1950s, which sounds naff, but he turns what could be retro and clichÃ©d into timeless design.

My favourite is a sleeve he did for a Seattle grunge band called The Thrown Ups: the images are entirely appropriate given the title of some of the tracks are Eat My Dump, Hairy Crater Man and Scaby Like My Love. The poster he did for the band, The Flaming Lips, is great in a tasteless way too.

He works quickly, and it shows – that’s why I like his stuff so much. It feels really spontaneous, like it’s been thrown together in a random way with relatively little time wasted worrying about typefaces. And why should he worry? This is not corporate work for big clients, his audience are pedestrians, his venue – lamp-posts, walls and shop windows.

Chantry’s work needs to shout to be noticed, and that means being loud and crude. He’s brilliant at both.’

Rebrand, blamed for falling profits, may have worked