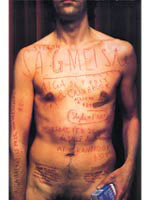 ‘Stefan Sagmeister seems to be producing some of the most interesting work at the moment. The first piece of work I saw in the flesh was at D&AD: Sagmeister’s American Institute of Graphic Artists poster, where he’d cut all the details into his body and photographed the result. Printed almost actual size, the poster is incredibly powerful. The fact that he also cut in the small credits shows his uncompromising approach.

His unusual ideas lead to unusual executions. The headless chicken poster (with chicken feet type) for AIGA is just bizarre. I saw a lecture by him at the Design Museum last year and came away with an overwhelming desire to produce amazing work.

The idea that design can and should make a difference to society is demonstrated in Sagmeister’s work for the Move our Money campaign. It was an American initiative designed to get some of the US defence budget reallocated to public spending projects. A pie chart badge shows the breakdown of defence spending compared with spending on health, education and housing. And his “Is it possible to touch someone’s heart with graphic design?” speech shows he’s interested in the effect of work on ordinary people, not just other designers.

His book Made You Look isn’t just a portfolio of work, but actually has something to say about his approach. The diary annotations, for example, are refreshingly honest: “Just saw the cover for the New York Times and have to admit that it’s much better than ours. This is my fault, I really should have come up with a better concept.” How many designers would admit to that?

Sagmeister is articulate, passionate and seems to enjoy himself – and admit to it, which is rare in the seemingly serious design world. And he comes across as a genuinely nice bloke.’

Designers can lead the way in NHS environments