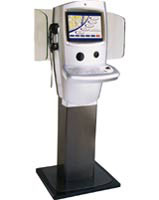 Kinneir Dufort has designed a range of public-use interactive Web phones for Marconi, part of a programme expected to net the telecoms giant £100m in revenues over the next eight years. Up to 28 000 of the phones will be produced as part of a deal with BT.

The consultancy has created two Web phones for the existing Neptune range, the Neptune 800 and Neptune 1000, which will offer payphone, Internet, text messaging and information services from a public payphone platform.

The 1000 is designed for ‘managed locations’ such as airports, train stations and shopping malls and is a free-standing unit. However, the modular nature of the unit means it can be converted and mounted to a wall.

The 1000 has also been tailored for use in the private sector and can be customised to take add-ons such as Web cams, privacy screens and printers and will be able to broadcast advertisements and digital videos when not in use.

The model is currently in pre-production and a prototype is due to launch in the autumn.

The 800 is designed to be wall-mounted in outdoor locations, but can also fit in payphone booths. It first launched in January and a ‘few hundred’ units are now on the streets. It is expected there will be ‘thousands’ in place by 2003.

The Bristol consultancy has worked with Marconi since 1999 when it began work on the design of the Neptune 200 and Neptune 400 and did not pitch for this work.