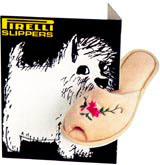 ‘When I think about influences, I think Robert Brownjohn, Henry Wolf, Saul Bass, Lou Dorfsman and George Lois, but I think about Bob Gill the most.

I remember stealing a college copy of [Gill’s] Forget All the Rules (sorry Kingston University). Everything about him knocked me for six, such as his ability to distill a problem down to its essence then bend it into a solution. His jobs seemed to design themselves, every visual decision made by listening to the deafening clarity of the idea. I travelled to New York on one of those bursaries, determined to see him. I struggled with my work through customs, stored it beneath the bunk bed in a sweaty YMCA until I became so freaked out, I moved to the Chelsea Hotel.

I went to a letterpress printer off Broadway and had a letterhead printed with my flash new address and dropped Gill a note. He called me at 6.30am and said he’d see me in half an hour. Blind panic set in. I had one of those typically useless Royal College of Art projects with me – a series of pillowcases with “Sharon and Wayne” names running along the top, “Gary” on the reverse of “Wayne” to show she wasn’t choosy.

I knocked on his door, pillows under my arm, thinking he’d definitely assume he’d got me out of bed. Minutes later, he had all my work out on the floor, cutting, re-drawing, telling me I’d got it all wrong. He spent an hour performing surgery on my portfolio in his slippers.

He said he must give me something and pulled out a proof of a letterhead for him and his wife, telling me it needed expert die-cutting. He chopped one out with a scalpel like a savage, which made it look like two letterheads overlapping, one for each of them. I still have it today.’