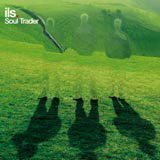 Red Design has created a set of album and single sleeves for breakbeat artist ILS.

The album, Soul Trader, is released in July, while the single, No Soul, is released later this month. The consultancy has also designed a sleeve for the remix of No Soul, also launched in June. The artwork is inspired by the album and single titles, says a Red Design spokeswoman. ‘We set out to convey a feeling of absence using saturated colours to emphasise a limbo-like dreamworld where soulless beings walk the land, invisible, but for the shadows they cast,’ she says.

The group won the work following a non-competitive creative pitch. ILS, which has been nominated in the Best Breakbeat Act category at this year’s Dancestar Awards, is signed to Brighton’s Marine Parade label.

Designers can lead the way in NHS environments