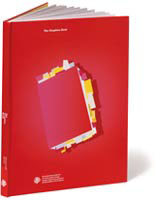 Despite the advances made by David Kester, the organisation’s energetic and reforming chief executive, British Design & Art Direction seems unable to shake off the last remnants of its image of a self-congratulatory club dominated by conservative power players from design and advertising.

At first glance this book appears to be a product of the back-slapping wing of D&AD: solid, worthy and preserving the status quo. On closer inspection, however, it reveals some fascinating buried treasure, but perhaps where you’d least expect it.

A selection of 29 designers are asked to nominate a designer whose ‘work and business practice’ they admire. Culled, according to the book’s editor Jane Austin, from ‘awards annuals, designers, magazine editors and museum archives’, it is a no-surprises list dominated by the great and good of contemporary design: Martin Lambie-Nairn, Mary Lewis, Lynn Trickett, Aziz Cami, Michael Wolff, Mike Dempsey, John McConnell and Alan Fletcher, minus a few notable absentees such as Designers Republic. A few overseas superstars are tossed in – John Maeda, Gert Dumbar, Wim Crowell, Milton Glaser, Javier Mariscal – and one or two nonconformist figures such as Peter Saville, Vaughan Oliver and Malcolm Garrett. But no shocks, wild cards or iconoclasts.

Each nominator is given a page and invited to say, in their own words, why they became a designer, describe their philosophical approach to design, and dish out a few lofty words of wisdom to the young. They are also invited to explain why they chose their nominee, but in an irritating editorial lapse, five nominators fail to name, or give reasons for, their choices. Why? Was their selection made for them by someone else?

Most of the nominators talk inspiringly about themselves and their nominees. Impressionable designers should skip the ‘I love brands’ contributions from Lambie-Nairn and Lewis, and go instead to Dumbar for his witty and coruscating appraisal of contemporary design.

The book is designed by NB Studio in the approved D&AD style. In other words, it is beautifully crafted, but just a bit ordinary – a bit safe. ‘The rather clever Post-It theme’, as it is referred to by Austin, provides a visual hook for the book. Well, it provides a reason for the retro use of pale tints of the process colours, and helps make the point that D&AD intends the book to be ‘a reference source’. The bright red, gloss-lam cover and Beano Annual binding would gladden the heart of the book’s dedicatee, the late John Gorham. So too would its use of stodgy old Rockwell.

For the most part the nominators make interesting choices. They tend to choose designers who have resisted the lure of bigness. Mark Farrow defines the breed when he notes: ‘I’ve never had any desire to grow into a big company. For me it’s about having the right amount of people so as not to compromise the projects you work on in order to meet overheads.’ A fondness for ‘cultural or political’ work characterises many of the others.

The nominees talk about themselves with wit, style and insight. And it’s here, paradoxically, that this book is at its most compelling. Johnson tells us about his bedside reading. Graphic Thought Facility are given the editorial freedom to say they disapprove of ‘paid-for awards’.

Newark is his usual loquacious self and bewails the fact that both practitioners and educators see design as a ‘non-intellectual’ activity. He also reveals a recent meeting with the Prime Minister, at which Tony Blair told him ‘our future is in your hands’. As Newark wryly points out: ‘A lot to ask from typography.’

Many years ago my dad used to watch a quaint old television show called Face the Music, a quiz for classical music buffs. I asked him why he watched it, since he had no interest in music. ‘Because musicians are such interesting people,’ he said. After reading this book you might want to say the same about graphic designers.