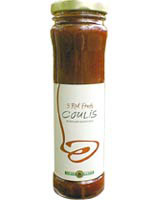 Ztwo Design has redesigned the packaging for James White Drinks’ range of fruit coulis, which relaunch from this week.

The range, which consists of eight fruit flavours including raspberry and wild blackberry, is positioned as ‘an indulgent dessert sauce’. The brand is expected to be picked up by major retailers in the near future and needed a ‘serious image’, says Ztwo Design director Nicki Scott.

‘The brief was very open, though a key factor was that the James White branding remained high on the pack hierarchy. We felt that the original look was a bit home-made,’ says Scott.

‘We tried to steer away from stereotypical fruit imagery and went for something abstract and contemporary. There’s something very indulgent about pouring the coulis on to ice cream or any other dessert and this is echoed in the design,’ she adds.

The consultancy, which was appointed in January, won the work without a pitch.