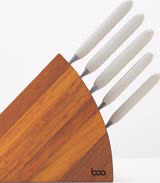 Homewares manufacturer and kitchen knife specialist Boa is a welcome newcomer to its market. Sara Manuelli finds out the ingredients of the company’s success and how it cuts it against rivals

The story of Boa Housewares is a tale of innovation, good British design and single-mindedness. A company created from nothing, it today turns over around £11m, with sales in the US, Korea, Japan, Germany, France and the UK. And the reason for this incredible financial success is a practical, yet eye-catching houseware collection, designed by Priestman Goode and packaged by Turner Duckworth.

Boa (UK) was set up in 1996 by Caroline Casey, marketing director, with the aim of manufacturing and distributing a product called the Boa Constrictor strap wrench. Enthusiastic New Zealander Brian Alexander joined a year later as managing director. Rapidly, the Boa Constrictor strap wrench became so successful that a single manufacturer had to be found to keep up with the increasing demand. Since they couldn’t find a manufacturer in the UK willing to produce enough items, Alexander decided to buy one instead.

‘We set up Boa Housewares as a result of buying Greenstar Moulding in 2000,’ says Casey. ‘We bought Greenstar to manufacture the plastic handle for the Boa Constrictor rather than sub-contracting it, but Greenstar was also a manufacturer of cutlery and chef’s knives, as well as other kitchen gadgets. The range was practical, but hardly desirable, and it gave us the idea of manufacturing a design-led brand.’

Although the UK has a glorious past with the Sheffield cutlery trade, most houseware products are today produced in the Far East at cheaper prices and lower quality. Both Alexander and Casey realised there was a void in the kitchenware market sector, an area that has become increasingly lifestyle related and aspirational thanks to the ubiquitous rise of celebrity chefs and TV cookery programmes. Following a brand-positioning meeting very early on, they decided that the brand should evoke a ‘modern British Alessi’ feel, have an affordable quality, functional aesthetics, be desirable, witty and fit for everyday living.

The comparison with Italian manufacturer Alessi is not accidental. ‘It is the only one that puts its money where its mouth is,’ says Alexander, and has a history of commissioning some of the most influential designers worldwide. Although since then Boa has distanced itself somewhat from Alessi’s latest, ‘more frivolous’ offerings, there is no doubt that the Italian company’s notion of design as a selling tool has caught on.

Asked which are its competitors, Casey suggests the Bliss range, sponsored by Nigella Lawson and designed by Conran & Partners. Within the knife sector, as hand-forged knives, she mentions Henckel and Sabatier, although they retail at a higher price. Recently, Ideo has designed a range of kitchen tools for Swiss company Zyliss, due to launch in the next few weeks. However, Boa’s competitive price bracket and high quality British production makes it a rather a unique offering.

‘Boa Housewares is a good example of how product design can be linked from birth to a brand structure and its values,’ says Paul Priestman at Priestman Goode. The product design group was brought in at the early stages of conception via a chance meeting through Bisque radiators, another Priestman Goode client.

‘We were impressed by Priestman Goode’s practical approach – both in terms of the practicality of the product being of paramount importance and the importance of manufacturing it at a commercial price,’ explains Casey. For Priestman Goode, this was the first time that it had turned its hand to kitchenware, having produced cookers and bigger appliances in the past. The initial brief from Boa was to develop a range that would be of prime quality, easy to hold and use, and be a modern update of traditional design. Simple guidelines indicated cutlery and utensils to be made from plastic and metal, board and block from wood, and the knife function to be apparent from the handle.

Working on a part royalty, part fee basis, e e Priestman Goode and Boa met for about a year, refining the 12-item range, collaborating on ideas, materials and techniques. ‘The whole process was very much a partnership,’ says Casey. ‘There were some designs I had been happy with that Priestman Goode continued to develop, as they weren’t totally satisfied with the design’s integrity – a good example is the bread bin, which it continued to develop until it became the sculptural object it is.’ The result is a sleekly designed and functional range comprising knife blocks, a magnetic knife rack, a cutting board with knife set and the incredibly successful Can Pull. A limited edition range of flatware in titanium will also be launched this year, arguably putting Boa firmly on the map in giftware.

Turner Duckworth was introduced to Boa via Priestman Goode and after a trial packaging project it came on board to work on the Boa logo. ‘This really defined the ran

ge and gave us a benchmark for everything, from business cards, the packaging and the products to live up to. The work that Turner Duckworth did with the logo and then with developing business cards and carrier bags really started to establish the Boa brand,’ says Casey.

‘The packaging is very innovative,’ says Alexander. For example they worked closely with the printer AB Cardworks to scan a piece of Kraftboard and print it on to microflute card, giving the packaging a coarse wrapping paper effect without affecting the quality of the images and type. Simple paper engineering means that the effect is attractive without being distractive. Alexander also appreciated the presence of Turner Duckworth’s office in San Francisco, which meant regular feedback from the US, an area particularly relevant to Boa’s sales.

Both Priestman and Duckworth sing the praises of Alexander and Casey. ‘They think big. They have a marketing background which is refreshing for us,’ says Priestman. For example, Boa has sold a total of 1.3 million Can Pulls, 350 000 of which sold over the last Christmas period. Duckworth echoes Priestman. ‘Alexander really has a good handle on the market, he knows the price [of houseware items] and could sell everything everywhere.’

Alexander himself makes it sound simple. ‘Good design doesn’t cost anything,’ he says, meaning that apart from actually paying the designers’ fees, it’s the vision and the quest for innovation that really makes the difference. And judging by the current sales, he seems to have struck gold. As Duckworth predicts: ‘It won’t be too long until everyone has Boa products in their house.’