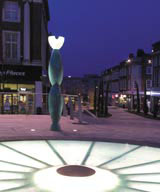 Richard Clayton focuses on urban regeneration and ponders the social, cultural and economic considerations that designers of public spaces are faced with

Like blue sky and the Green Belt, improving the public realm seems an inherently good thing. But what sounds well-intentioned in theory can be woolly in practice. Urban regeneration is the talk of town halls from Barnsley to Birmingham – thanks in part to deputy prime minister John Prescott’s dogged championing of the cause. All too often, however, street-level design plays second fiddle to headline-grabbing building projects.

That is certainly the view of Thomas Heatherwick, who is on the verge of starting the design phase for the Central Milton Keynes masterplan (News, DW 13 March). Not every city can replicate the success of Bilbao with its Guggenheim museum, Heatherwick suggests, doubting whether such architectural landmarks are always the right strategy.

Heatherwick’s comments were echoed last week in a speech by Sir Stuart Lipton. Stirring up interest in his recently launched Commission for Architecture and the Built Environment Space unit, the CABE chairman bewailed the state of the public realm, notably urban parks.

‘As a society, we now seem to accept the poverty of our streets and spaces… too many buildings arrive with apparently little or no consideration for their context, particularly the public space around them,’ Lipton claimed, observing a general lack of ‘creativity and innovation’ in design interventions.

Clearly, Lipton has not been to Morecambe recently – where Why Not Associates and artist Gordon Young have created thought-provoking public seating and a 300m -long typographic pavement installation, A Flock of Words, based on the seaside town’s bird life. All the same, Why Not partner Andy Altmann agrees with much of what Lipton says.

Grand buildings tend to get the money and little is left over for outside spaces, he says. A lot of public art is ‘po-faced’ and lacks the detail required to draw people in.

‘Everybody wants to read it [the text in A Flock of Birds], even if it’s quite obscure. The public are underestimated about what they like. You may get some flak when something comes out, but if the quality is there people will warm to it, [especially] if you can prompt a smile or make people think.’

Streets are where cities come to life, but Altmann feels that many councils and developers display a ‘lack of ambition’ about the public realm. One exception is Warrington, where Landscape Design Associates has revitalised the town centre around a 5m-wide granite-edged water feature, a Well of Light, with a bronze ‘medallion’ at its heart.

LDA director John Hopkins says urban design guidelines and collaborative working between all the stakeholders is the way to progress. The public realm can create an ‘infrastructure’ that makes an area attractive to developers and retailers. ‘The clear message [in my experience] is that public investment is an essential trigger to private investment.’

Nevertheless, Hopkins agrees with Lipton that a balance needs to be struck, whereby property values are not the primary concern of regeneration plans. Developers can be won over, he says, if the economic, social and environment returns of ‘the right spaces in the right places’ are demonstrated.

‘Part of me thinks there should be much more control as far as retailers are concerned,’ he says, ‘There’s too much taking and not enough putting back. Look at [London’s] Oxford Street. The quality of signage there is awful; [whereas] in Glasgow, where there is control, people have to respect the architecture. Even McDonalds has to put its logo behind glass or render it in keeping with the granite stonework. There should be more care in how [public realm design] is tackled. I like the idea that streets have their own character.’

Hillman nods in the direction of the New West End Company, which has Alan Fletcher working to improve the image of London W1. But fitness to place is largely absent, he feels, from commercial strategies.

‘What has become the convention is slapping something straight across the facia,’ he asserts. ‘Even the Post Office in reality has one answer for everything, whether it’s a rural or an urban environment. I do find it rather offensive. You need different rules for different situations.’

Decision-making rests with local authorities and Hillman thinks their powers should be increased. He says laws in Canada stipulate a percentage of development investment goes on public art, while in New York the ground floors of office buildings have to be given over to public space.

Such a public realm ‘planning gain’ is one possible option, Hopkins concludes, but the emphasis must be on high-quality and sustainable ideas. In other words, it’s not just about making the initial capital investment, but about finding the revenue for management and maintenance as well.

‘We are afraid to play; we need to start taking more risks, to experiment, to have some fun’

‘We have to put quality back into the ordinary – the totality of civic space is what matters, not just a few good buildings’

‘Buildings and spaces have a value beyond price. We need a better understan