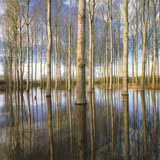 Fine art photographer Charlie Waite’s most recent collection of works around the theme of Hope are on show until 14 June. His photographs of nature reflect the feeling of optimism and inspiration and range from land- scapes in Namibia and America to scenes from Northumberland and the Thames. (Reflection of the Somme pictured.)

Shhh… Sounds in Spaces from 20 May until 30 August, is an international sound exhibition featuring artists and musicians including David Byrne and Gillian Wearing, who are creating new sound inspired by the Victoria & Albert’s collection and galleries.

Photo London launches this week at the Royal Academy’s new space, from 20-23 May. Billed as the city’s first major international photography fair it features 50 galleries and includes work by Man Ray, Bill Brandt and Helmut Newton.

Caravan is the first major UK touring exhibition by Australian ceramic designer Gwyn Hanssen Pigott and runs from 20 May until 26 September.

From 20 May until 6 June, Image & Identity is a UK-wide project aiming to inspire young people’s creativity on the theme of personal identity and public perception. Nine groups from Manchester and the surrounding regions have worked with artists over six months to reflect on their own experiences through a range of media.

Sea pieces Jigsaw back together

Students that put their skills into practice will stand out