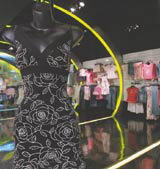 According to design director Andrew Skakel, the client wanted a dramatic idea that would set the shop apart from its competition. ‘After a review last year we decided to take a fresh look at the design.

‘We wanted to create a more distinctive image – the client suggested a “clubby” feel,’ he explains.

The interior of the Edinburgh Ocean Terminal outlet ‘seduces shoppers into a darkened, theatrical atmosphere’, which is illuminated by white panels and bright pink back-lit displays.

Versions of the concept will be rolled out to other prominent retail locations in the UK over the next 12 months.

Skakel & Skakel won the project on the basis of its ongoing relationship with Jane Norman.

I won a competition, not a free-pitch, for D&AD