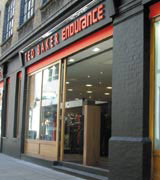 According to the spokesman, Ted Baker is enjoying rude health. ‘A lot of our focus is in America right now,’ he says, adding that stores in Australia and New Zealand are also in the pipeline.

The Endurance concept store – a slick space with an on-site tailor, ‘membership’ cards that hold shoppers’ measurements and touch-screen displays that provide product information – is a one-off, he says, and has more to do with moving on the formalwear market than repositioning the brand.

Bullish talk aside, Four IV joint managing director and director of strategy Georgia Fendley suggests that mid-market clothing retailing may not be as buoyant as it would like the outside world to believe.

‘Value retailers are introducing high fashion. The barriers are coming down; look at Zara. You don t have to lose fashion appeal if you’re going for budget’, she says.

Such encroachment by savvy retailers is one cause of mid-market brands’ woes, she says.

Fendley, who was involved in Kurt Geiger’s interiors revamp, says it is misguided to suggest that brands can reposition themselves simply through design. ‘It can do a lot to change people’s perceptions. But at the end of the day, the product has to back up whatever promise the brand is making’.

Some mid-market fashion retailers have recognised this basic truth and thrived. Fendley points to Next, which she says has ‘gained ground’ thanks to mistakes made by its competitors.

‘A positive thing for Next is its location; it’s all over the country. But ultimately, what the brand promises, it delivers. Next understands its customers,’ she says.

The Natural History Museum celebrates the union of science and art