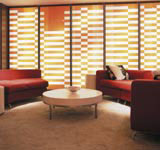 GA Design International has revamped a series of dressing rooms, green rooms and superstar suites for BBC Studios, in what is the first major revamp of the space in 20 years. The rooms feature Holo Screen TVs, which appear to be free-standing glass panels until turned on, translucent tinted gel-laminated glass, sofas covered in ‘liquid leather’ and space-saving chairs and desks that double up as make-up units. The curved exterior wall of BBC Television Centre has also been used as a design feature, with mirrors on the end wall creating an impression of a 180-degree curve.