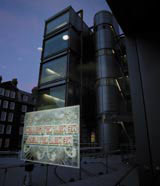 In 1950, Knud Jensen, who founded Copenhagen’s Louisiana Museum of Art, started Art in the Workplace – a scheme enabling companies to subscribe to exhibitions of contemporary art.

Since then, this progressive idea has grown to the point where it is a major source of patronage. In the UK, it took off during the 1980s, as corporations bought art to express prestige, decorate their offices and provide investment.

A professional strata of art consultants came to the fore, and dealers found new revenue streams advising businesses. Some companies now have world-class collections. Deutsche Bank has 48 000 artworks worldwide and 3000 pieces across London, including works by Damien Hirst and Anish Kapoor.

Now, it is widely acknowledged that art in the workplace is beneficial and inspiring. Certainly, there can be few design groups without some kind of visual stimuli on walls, mantelpieces, possibly even floors. For the new corporate art collection mixes its media, and its message.

Channel 4 has just launched an art-in-the-office initiative called ART4, a new programme of contemporary visual art to be shown in its headquarters. It augments an existing photographic collection, including work by Garry Winogrand and Nan Goldin, and takes the corporate art collection into a new realm.

Channel 4 has mostly chosen early-career artists. It will make the artworks available, as it intends to lend to galleries and museums. At the end of three-year cycles, it will donate works to the National Arts Collection Fund.

‘We’re not dealing art, and it’s not about decoration,’ says Janet Lee, commissioning editor for the arts at Channel 4. ‘It’s part of our public service; not for profit. And it enhances the staff environment. It’s the kind of art people here like, and what they want.’ Indeed, the staff had a say in ART4.

Originally, Cristina Fedi of Channel 4’s marketing department, who helped set it up, sent an e-mail to everybody in the company, and the inbox swelled with positive responses and artist recommendations. ‘It’s about making people feel that their workplace is creative in all its aspects,’ says Fedi, ‘and it’s about transmitting that creativity.’ She will not divulge the budget apart from to call it ‘small’.

Corporate wallpaper this is not. Lee sees the initiative in the same light as one of Channel 4’s productions: provocative, mischievous and challenging.

ART4 is not intended as a safe bet, but to encourage creative thinking – and, of course, there is a public relations spin-off. Art programmes are often installed when a company moves into new offices or is rebranding. It sells the idea of benevolent patronage, and also that management is a bit ‘visionary’.

Some might question whether art in the workplace matters to the shop floor, but it seems that employees are keen. On-line print and photography dealer Inside Space polled employees and found that 98 per cent wanted some form of art at their place of work. And a survey carried out earlier this year by ICM and Arts and Business – a company that aims to encourage interaction between private companies and the arts – found that 73 per cent of employees wanted more art in their workplace, claiming it made them feel more ‘motivated’ and ‘inspired’.

This is vital to John Bevan, a design consultant with GMW Architects, who works with existing company art collections. ‘Art shouldn’t be confined to the executive suite,’ he says. ‘One of the great things is the way art encourages interaction and creativity.’ The demand for integrated artworks is such that a company called Offthewall has started producing space dividers for open-plan workplaces that are limited-edition prints on mesh by British contemporary artists, including Duggie Fields.

‘The corporate art collection has moved on,’ says A&B’s Sigrid Williams. ‘It once meant oil paintings in the boardroom. Now, businesses are intent on a creative workforce and we’re seeing installation and performance work that is much more engaged.’ The artworks may even help shape the organisation and help it evolve.

‘Art is even being integrated into company working structures,’ adds Williams. ‘Ogilvy & Mather and Lever FabergÃ©, for instance, bring artists into their workspaces in order to stimulate creativity and influence working practice.’

The ‘number one home and personal care provider in the UK’ – also the largest commissioner of posters – Lever FabergÃ© began a collection of contemporary art in 2000 and now has an ‘in-house creativity programme’ called Catalyst. ‘With Catalyst we bring art into the office to assist our own working practice,’ says Catalyst assistant producer Katherine Mellor.

‘We involve staff in every aspect of the collection and we invite comments, which we post next to the artwork. It stimulates the staff, and their critical skills. They all need to be able to articulate visual imagery, as it feeds into their work and gives insight into how our consumers might think,’ she says.

Even closer to the creative coalface is a recent initiative by Catalyst whereby ten artists have been commissioned to make works of art based around Lever FabergÃ©’s brands and then work alongside the marketing team. A recipe for disaster? ‘Could be,’ says Mellor. ‘It’s a risk. Artists show us things in different ways, and that might cause tension.’

One of the key companies in the sector is International Art Consultants/ Art For Offices, which started in 1979. ‘Art is a demonstration of the importance of the workplace,’ says its co-founder Andrew Hutchinson. ‘It definitely keeps people stimulated. We did a survey of employees in 150 companies with collections and found that the art contributed to a healthy working environment. I’m certain there are positive effects on creativity, however subliminal.’

He says that, as with Channel 4, the placing of art in offices is now becoming integrated into a sophisticated process that includes branding – interestingly, art-purchasing programmes are increasingly coming from companies’ marketing budgets.

‘We’re completing a commission for Vodafone in Newbury, in which an artist, Diane Edmonds, has made a Perspex piece in Vodafone red and in the shape of a speech mark, with a second speech mark in a lake,’ says Hutchinson. ‘It expresses the company’s quality of “connectivity”, and anyone visiting will know they’ve arrived at the right place when they see the sculpture, rather than a sign.’

It’s a long way from Jensen’s landscapes in the factory canteen, and an extremely sophisticated use of visual language. But with the integrated approach, the question will increasingly arise: can the art serve the office, or the office serve the art?

For more go to www.channel4.co.uk/art4

Registered by chance, or a Design Conspiracy?

Shame the design process was such an Olympic bid