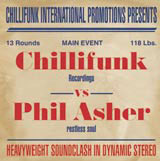 Soma Creative weighs in with a prize fight theme for one of its sleeve cover projects for Chillifunk Records, a new offshoot of Flying Records. The design for Chillifunk vs Phil Asher was inspired by the idea of a ‘heavyweight soundclash’, according to Soma creative director Stephen Morgan. ‘We went for an old-time, 1960s boxing match sort of image and all the typefaces are deliberately grainy. It looks like the “poster” is beginning to stain around the edges,’ Morgan explains. For another Chillifunk Records release, Bob Jones and Lofty: Moving On, Soma has gone for an ‘earthy feel’ and ‘ambient colour’ combined with the prominent placing of the artists’ names to ensure standout. Both records are due to be released in the new year.

Bunch of geezers who regularly plumb the depths