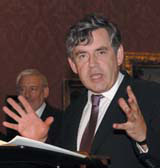 Industry lobbying to extend the research and development tax credit to design businesses has received a boost with the publication of a paper by Chancellor Gordon Brown, stressing the need to incentivise UK innovation.

In an article for the Financial Times last week, ahead of a G20 meeting of European finance ministers in China, the Chancellor stated that ‘old state aids should make way for the modern research and development incentives’.

The idea of tax rebates, on R&D projects, has long been seen by design industry organisations as a critical way of nurturing innovation-heavy SMEs in the creative industries. The tax credit is expected to be a central plank of the Cox Review, when it is published next month.

‘The Government could signal support for company investment in design as a key part of R&D, by extending R&D tax credits explicitly to include design activities that are integral to the technical product design process,’ says Design Council deputy chief executive Harry Rich.

Rich also advises that ‘greater clarity and uniformity’ is necessary about which design activities would qualify for the credits and points out that ‘this should be communicated to tax inspectors and businesses’.

Until now though, the Government has been unclear about how it proposes to ‘enhance the R&D tax credit’ with respect to design businesses, as stated in the last budget.

The existence of the Cox Review is in itself an acknowledgement of the challenge faced by first world countries as the balance of influence shifts. What will clearly be preoccupying the thoughts of Europe’s finance ministers, as they settle around their ever-lengthening table, is how best to cope with the impact on the global economy of emerging nations such as China and India.

In a paper published last week, entitled Global Europe/ Full-Employment Europe, the Chancellor notes that ’20 years ago, just 10 per cent of manufactured goods came from developing and emerging countries. The challenge from China and India is now such that, by 2020, the figure will be 50 per cent… China’s trade is doubling every three years.’

There seems to be a growing realisation from Government that we need something to kick-start innovation in this country, and that design must play a critical role. What concerns the Chancellor is not just ‘Chinese spending on R&D doubling as a share of GDP between 1996 and 2002’, but also how, ‘despite increasing rewards to innovation, it appears the EU has lower levels of innovations than major competitors, such as the US and Japan’.

Brown’s paper goes further still, highlighting the fact that, in Europe, patent applications per head of population have been half the level of the US and Japan, and that R&D by US businesses is 50 per cent higher than in Europe. As China and other emerging countries continue to increase their levels of R&D spending, EU businesses will begin to come under greater and greater pressure, unless action is taken immediately.

Beyond innovation, Gordon Brown is also seeking a solution for the relative paucity of entrepreneurial activity in Europe compared to the rest of the world. If ‘total entrepreneurial activity in the US, Canada and China is double or treble that in the large EU member states’, as he reports, then the Chancellor may well be looking to incentivise start-ups like design consultancies in next spring’s budget – particularly when their ‘dynamism’ and ‘flexibility’ are the model qualities he wants to foster in the UK economy.

The Chancellor’s Call for Action

• Speed up completion of Single Market in key sectors

• Europe should reject protectionism and press for a trade deal to open markets to exports from developing countries.

• UK, France, Germany, the Netherlands, the US were the top five exporters of business services in 2002