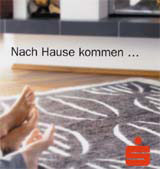 In a project that will overhaul the architecture and interiors of the bank’s 45 branches, as well as its communications material, the central idea is to design physical products to support the sale of its largely intangible financial services.

It is understood to be the first time the idea has been given a green light by a bank, although similar projects have been considered in the UK.

‘In the old days, there were reasons to go into bank branches, and then customers could be sold higher ticket items, such as mortgages and insurance. But, as people don’t visit so often now, it is harder to sell intangible services, especially as people don’t actually walk out with anything,’ explains JHP Design managing director Steve Collis. In a bid to create a stronger connection with its customers’ lives, Erste Bank-owned Tiroler Sparkasse will introduce physical products or representations of the bank service they have used, ‘such as a car accessory for a customer borrowing a loan for a new car’, says Collis.

JHP will configure the branches so that customers are directed to the correct area depending on the ‘pace’ of their inquiry. In-branch communications material will also be tied to the local economy where possible.

The consultancy was approached directly by Tiroler Sparkasse’s brand management consultancy, Vienna-based Brand Logic, to handle the project. The first redesigned branch opens in Halle in May 2006.

Don’t diversify too far from your brand’s core values