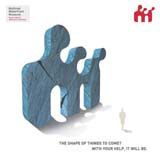 The UK’s newest national museum – the National Waterfront Museum in Swansea – opens this week, designed by a host of consultancies.

Interpretive design consultancy Land Design Studio has been liaising with the architect of the masterplan, Wilkinson Eyre, to conceive the £31m waterside museum, which will relate the story of the industrialisation of Wales.

The museum’s name, identity and brand strategy has been drawn up by Corporate Edge, which was appointed to the task in 2003 following a competitive pitch. The group has also been advising the project team at the National Museums & Galleries of Wales on areas including Web design and fundraising materials.

In a £6.3m design project, Land has been working through the extensive archive of objects and information at NMGW to produce a series of narratives. It has also developed a wayfinding system that enables visitors to take a variety of routes through the museum’s space, which is split by a central internal ‘street’.

‘We were interviewed by Wilkinson Eyre and NMGW before they had done any design work, so we had a blank sheet to work from,’ says Land director Peter Higgins. ‘We had to knit the stories – about the Industrial Revolution, its collapse and the nation’s future – into the building plans as they were drawn up.’

As the museum has multiple entrances, a standard chronology of historical events was not an option. Instead, Land has created a series of themed areas, focusing on character stories and the technical side of industrial development.

Software and interface designers Newangle, Studiosimple and ISO were brought in by Land to develop the interactive archive of material that supports the historical objects on display. Graphic design is by Acme Studios, with lighting by David Atkinson Lighting Design.

‘Media has been used in a more appropriate way [than in earlier projects]; technophobic people aren’t worried about it, and it allows you to drill down into many layers of information. We are getting better at using media in what is becoming a new genre of museums,’ Higgins explains.

The architectural masterplan establishes a direct axis from the waterfront to the city centre via a park, while taking account of commercial activity along the waterside and the archaeological marks of the original railway lines. Part of the museum occupies the shell of the Grade II-listed warehouse that was formerly the Swansea Industrial and Maritime Museum.

The five-year project received £11m of funding from the Heritage Lottery Fund, the largest grant yet to go to a scheme in Wales. It is being held up as a benchmark for access standards, meeting regulations set out by the Disability Discrimination Act. The exhibition is presented in English and Welsh, as well as British Sign Language. A dual-language promotional campaign for the museum’s launch has been created by Cardiff group Peter Gill & Associates.

• City and County of Swansea have secured land, buildings and funding for 25 years