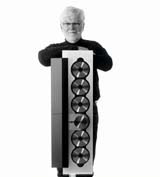 As most mobiles become increasingly complex and multifunctional, Bang & Olufsen goes against the grain with a simple, but durable handset. Scott Billings looks at the stylish new Serene

Its first phone to market – the castanet-cum-make-up case called Serene – is only the first dash of Lewis’s ideas; a market-tester for the further exploration of his designs.

It is fair to say – or, at least, B&O president Torben Ballegaard Sørensen agrees – that Lewis effectively ‘is’ the B&O aesthetic. He has worked with the company for 40 years and shows little sign of flagging; although technically easing into his retirement years, Lewis is adamant that he would soon ‘get bored’ should he stop working.

Lewis’s longevity at B&O explains the consistency of approach that you find when you thumb through the Danish company’s back-catalogue of audio, visual and communications products.

Although arguably best known for its high-end audio equipment, B&O has long delivered a range of telephones, both corded and cordless, alongside its amplifiers, speakers and televisions. The move into mobiles, says Sørensen, was something the company had long wanted to make – but the product had to be right.

The Serene concept has been drawn from a larger idea of Lewis’s, elements of which are likely to come to fruition after the product has been tested in the market. ‘David has more ideas in the mobile arena and we are looking at these now,’ says Sørensen.

The physical gestation of the Serene has only been two years, prior to that a suitable technology partner had to be found to realise the design with the required elegance. After a global search, B&O settled on South Korean giant Samsung Electronics for this collaboration, the first tie-in of this kind in B&O’s history.

This is a tidy fit: B&O gains access to Samsung’s technical expertise in developing mobile phones, while Samsung ratchets up its credentials as an innovative, premium brand. The phone itself is neatly dual-branded, with the company names appearing on both sides of the phone’s polished hinge.

But could this move have a deleterious effect on B&O’s brand? Top-flight hi-fi equipment, simultaneously offering modish furniture and precision acoustics, is often a lifetime’s investment – objects that may be kept for, perhaps, 30 years. Mobiles, however, are distinctly ephemeral, the latest technology and designs toppling over one another to enter the market. Meanwhile, consumers are cajoled into accepting free replacements for their handsets in return for signing up to a new contract. Rarely even paid for, and frequently replaced, mobile phone units have been rendered almost disposable.

‘The perception of Bang & Olufsen was something we considered for a long time,’ admits Sørensen. ‘We didn’t want to damage the brand. We’d rather have one new phone every two years and it be really radical, than simply launch one after another.’

But B&O knows its customers and what they are willing to pay for. ‘In Denmark, prices are some of the highest in Europe. We will go to extremes to solve problems even despite the cost. We would rather charge more and make sure we get it right,’ says a spokeswoman at the launch of the Serene.

Ironically, it is perhaps what the company has left out of the design that may render the phone a more retainable item. Its ring tones are based on samples of natural steel, wood and bronze percussion instruments and can be varied in intensity. But there is no facility to download additional tones and the phone does not support video streaming. Lewis has opted for a controlled simplicity of features, perhaps leaving the product more resistant to the pressure of new technologies.

Although technically an external consultant to B&O through David Lewis Designers, Lewis appears to be the superintendent of detail. ‘[My role] has become a bit more overseeing than hands-on in the last few years, but I do prefer getting my hands dirty. I am a designer,’ he says. 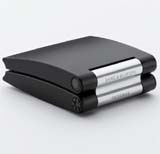 ‘Twenty-five years ago we had less technology, but we always had the ability to disguise the technology and make it easy. The same is still true,’ says Lewis. ‘I try to do something that is timeless. You have to hold back and be neutral because you are being invited into people’s homes and we don’t want to redecorate them.’

The company produces just four or five new products in a typical year and many concepts are filtered out at the feasibility stage. After a little dabbling with mobile phone shells in the 1990s, the Serene is the first time B&O has got the mobile right, says Sørensen. And retailing for approximately €1100 (£753), you would expect little less than perfect.