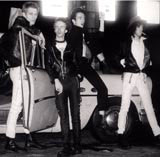 A book to mark the glory years of The Clash, which showcases photographs of both the band and the era by photographer Bob Gruen, has been launched this week. An accompanying exhibition, which also features photography by Gruen, opens on 27 September in London’s Camden. Gruen came to London in 1976 at the height of the punk explosion and the birth of The Clash. He spent the following years photographing the band, also documenting other big names of the time, such as The Rolling Stones, Elton John and Led Zeppelin. The book, published by Vision On, includes interviews with members of the band.

Cunningham profile sums up his life and work clearly

Ian Logan teams up with The Nest