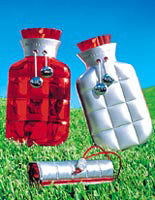 Designer Jean Charles de Castelbajac is entering the world of perfumery with the launch of a fragrance, Castelbajac, from the end of this month. The perfume will be stocked initially in Selfridges, then by selected department stores and perfumeries nationwide from October. The fragrance, aimed at women, has been developed with Maurice Roucel, while the identity, packaging and bottle has been designed with Sylvie de France. The fragrance comes in three different sizes, the medallion, the companion and the nomad. De Castelbajac is best-known for his work in fashion and is working on costumes for the US TV series Sex in the City.

Rough and Daly team up for The Antidote

Can an “alternative” design funding platform "upend" the status quo?

Alternative Thinkers looks to provide a space for designers to find investors, collaborators and opportunities for projects with a social focus.

Led by the team at Popp Studio, the lingerie brand’s new look features a redrawn logo and wordmark, as well as a rethought colour palette and packaging.

Interiors Cad Technician – Working from home for 4 weeks in July