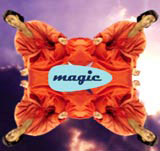 The 24-hour music video channel is a spin-off from easy-listening radio station, Magic, owned by Emap. It will feature a non-stop jukebox and viewers will be able to phone in with requests.

The consultancy won the work without a pitch on the strength of previous projects on Emap’s Q TV and Kerrang TV spin-off channels. Ortmans Young designer Jamie Balliu also worked on the Magic project.

Ian Logan teams up with The Nest