Ferrari has been named the world’s strongest brand in the Brand Finance Global 500 report.

The document by independent branded business valuation and strategy consultancy Brand Finance, ranks the most valuable brands in the world. Brand strength is not the same as brand value – but it does play a role in it.

Brand strength evaluates how well a brand is performing compared to its competitors based on three elements: marketing investment, stakeholder equity, and business performance.

Marketing investment looks at how the company is putting money into its business to “create brand loyalty and market share”.

Stakeholder equity looks at how it is perceived by different groups including customers, staff and the general public, while business performance looks at profit margins and how it is doing financially.

The spirit of Ferrari

Ferrari’s success in building a strong brand is partly due to the company’s ability to expand into other sectors such as merchandise, according to a Brand Finance spokesperson.

“This makes sure there is a whole culture around Ferrari,” he says. “So, it is not just the car, but the whole spirit of Ferrari, which drives the brand’s strength.”

“It is easy for a brand to spread itself thin but that hasn’t happened with Ferrari,” he adds. “It has maintained a luxurious look and feel despite also selling caps and keyrings.

“It invests in new models and technology, it is looking at electric cars – it is at the forefront at what it does.”

The list of the top 10 strongest brands also includes Deloitte, McDonalds, Intel, Neutrogena and Coca Cola as well as Russian banking company Sberbank, among others.

While Ferrari tops the list for brand strength, climbing from third place last year, the luxury car company is at number 222 for brand value, which is also a higher rank than last year.

Luxury brands are often “very strong” but may not rank as highly for overall brand value, according to the spokesperson.

“Luxury brands don’t generate as many sales, they don’t want to go into mass production as that would diminish their luxury status,” he says. “For example, Ferrari might limit the number of cars they make.

“The strongest brands can come from any sector,” he adds. “What is important is how they are performing against competitors.”

A company that makes decent profits but is not perceived well by its customers, may not rank highly for brand strength.

Alongside the strength, the Global 500 list looks at a brand’s value, based on calculations involving brand revenue and royalty rates. It also incorporates the brand strength.

Royalty rates are based on how much money a company would get if its intellectual property was used.

Tech firms have topped the Brand Finance Global 500 list for brand value. Amazon is in first place with a brand value of more than $187.9billion (£162.8billion) followed by Apple, Google, Microsoft and Samsung.

While the top three have stayed the same as last year, Microsoft has gone up in ranking while Samsung has gone down.

While brand strength may have an effect on brand value, high revenues can help to keep its brand value rank high.

Facebook, for example, has seen its brand strength decrease by 11% from last year following a year of scandals including the Cambridge Analytica revelations, but the company still took a spot at number seven for brand value.

“The brands that are valuable are those that have enormous revenues,” the Brand Finance spokesperson says.

“They might be very strong or might be coming from sectors where brand [image] is not as important such as mining, as opposed to luxury.” 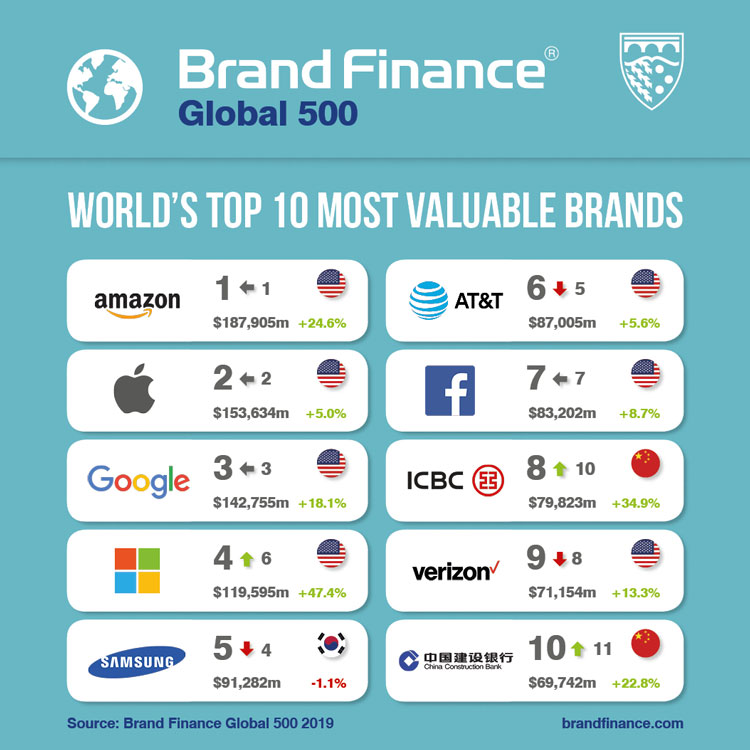