Dominic Evans describes his drawing style as comic-book-meets-fashion-illustration. The illustrator – known more widely online as Dom&Ink – first started developing his technique as a kid, using books like How to Draw Comics the Marvel Way, by the late Stan Lee and John Buscema.

Trawling Evans’ social media feeds now, the muscly heroes and action scenes in the Marvel book feel worlds away from clients of his like Cheryl, Little Mix and Manchester Pride. The illustrator insists, however, that he got his money’s worth. “The book gave a, slightly problematic, step-by-step guide on drawing ‘femme fatales’ with high cheek bones and arched eyebrows, and I was hooked from then,” he says. 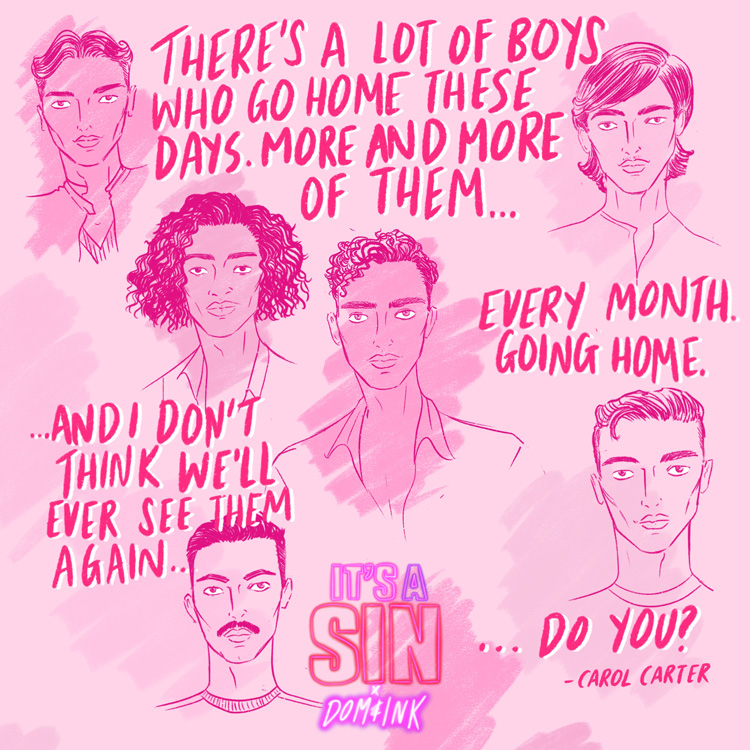 After laying the foundations “the Marvel way”, Evans studied illustration at Manchester Metropolitan University and then later at Brighton University. Up until two years ago, he supported his creative career with a retail job.

“I’d be invited to events to do live illustration or something similar, but I’d have to tell them to wait until I finished work at seven,” he says. For this reason, the 34-year-old illustrator says he considers himself a “late bloomer”.

Never one to miss an opportunity though, he says he’d turn up to brand events with armfuls of business and postcards to hand out to potential clients. Even now, he says this is how he gets a lot of work. “I think a lot of people think I’m just handed these projects, but actually I pitch for most of my work and approach anyone I can,” Evans says. 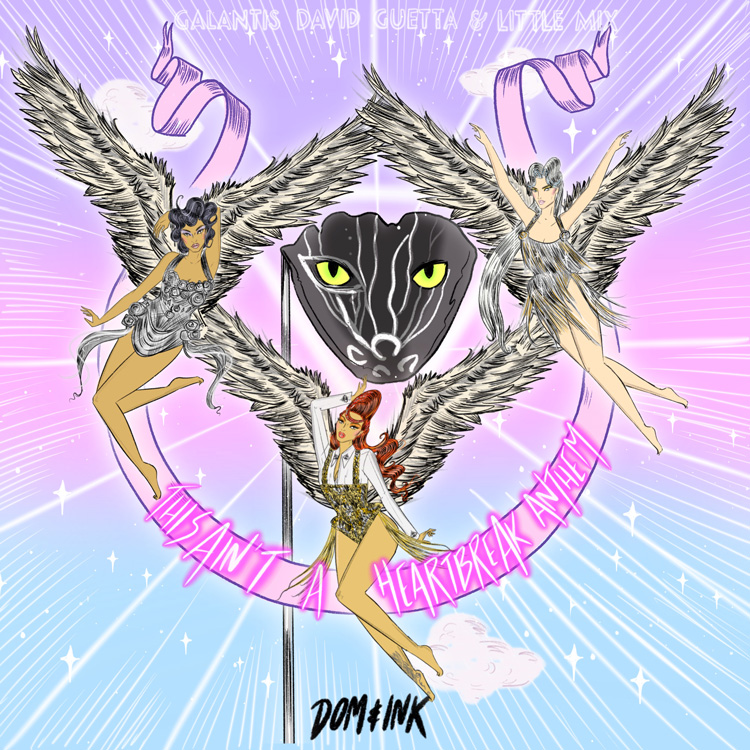 Like all illustrators, Evans’ style has evolved over his career. He says he’s gone from exclusively drawing women to trying to represent more people in his work. “My mum is in and out of a wheelchair; I have a friend with a colostomy bag – and when I realised I wasn’t representing these people I tried to change,” he says. “It’s hard to represent everyone, of course, but it’s worth trying anyway.”

His now-signature colourful work is also relatively new. Evans’ first two published books, Map My Heart and Map My Style, were illustrated and printed in greyscale. His most recent two, Free to be Me and Queer Power, which was published in May, are anything but black and white. The change is both a personal one, and reflective of professional experiences, he says.

“I think every art kid goes through a phase of drawing skulls and other goth-y bits,” Evans says. “But I’ve also found a lot of prospective clients want to make your work ‘less gay’ if they can, to make it more palatable – as a queer illustrator you have to be able to stand your ground against that.” 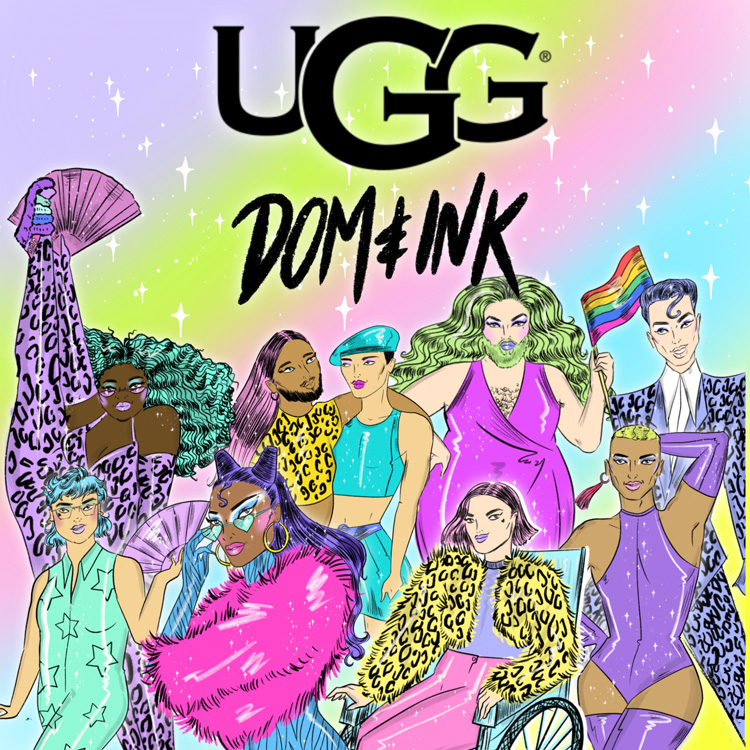 Certain projects have helped him realise his passion for “capturing queer moments” in his signature maximalist style. Most recently, these have included work for Channel 4 series It’s A Sin, Little Mix’s The Search and Drag Race UK. The latter in particular was a “breath of fresh air”. “The producers were really up for anything – heels, makeup, stars, eyebrows, rainbows, bells, whistles, everything – and I realised I like that way of drawing way more than minimalism.”

A lot of people in film and television don’t realise how powerful illustrations can be as companion content, he says, but Drag Race UK’s use of the medium showed how limitless it could be.

“We started off with illustrations of the queens and their looks obviously, but as different storylines developed we were able to react to that – when Bimini and Ginny [contestants on the show] discussed their non-binary identities, we designed infographics about being a good non-binary ally, and when Sister Sister [another contestant] was trolled online, we put together something on online conduct.”

The project became “a real education point for people who don’t necessarily have many connections to the LGBTQIA+ community”, Evans says. 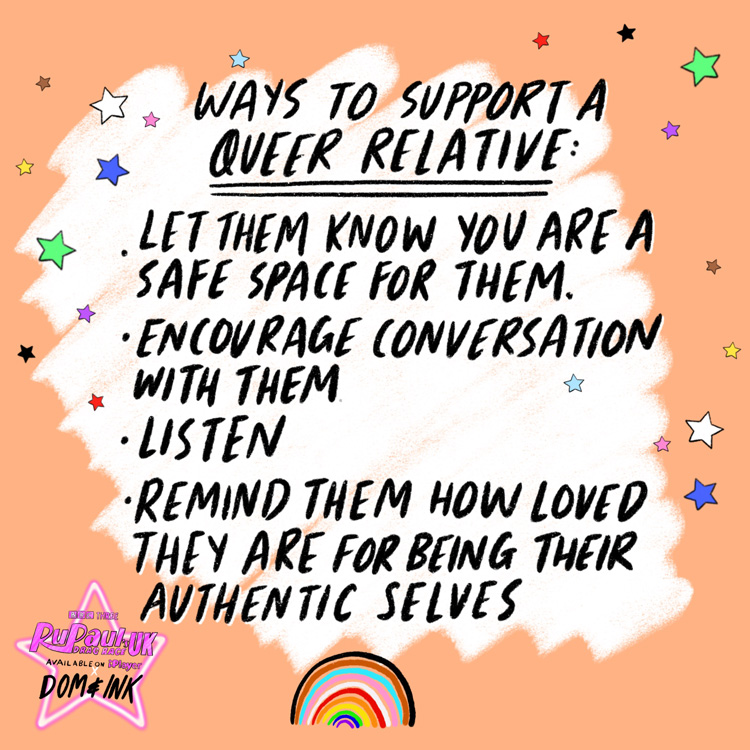 For 11 months of the year at least, Evans says queer illustrators are usually asked to “tone down” their work. “But when Pride month [June] comes rolling around, queer creatives need to be on their guard for the opposite reason,” he adds, explaining this time of the year is usually when LGBTQIA+ illustrators are taken advantage of in the name of Pride.

Recently, the illustrator published a conduct guide for brands looking to work with queer creatives, in a bid to stop this from happening. The list of suggestions included protecting creators from online hate, giving back to the community, and of course, paying creators. “Exposure is not going to pay my rent or buy me food,” Evans says.

Evans says gradually brands are starting to listen, but it’s a slow process. “There’s still usually a moment where you speak up and you’ll either lose the gig for being ‘too demanding’ or things will be magic,” he says. For this year’s Pride month, he says he’s been pleasantly surprised with how willing brands have been to go “beyond just the rainbow”. “It’s rare as a queer illustrator to feel completely uncompromised.”

The hope is now, he says, that brands can start extending their advocacy beyond just the month of June. And with the coronavirus pandemic pushing events like London Pride to later in the year, he says 2021 is the perfect year for this to start. “At the end of the day, come midnight on 30 June, I’m still gay, and so are a lot of other people.

“We should be doing this work all year round.” 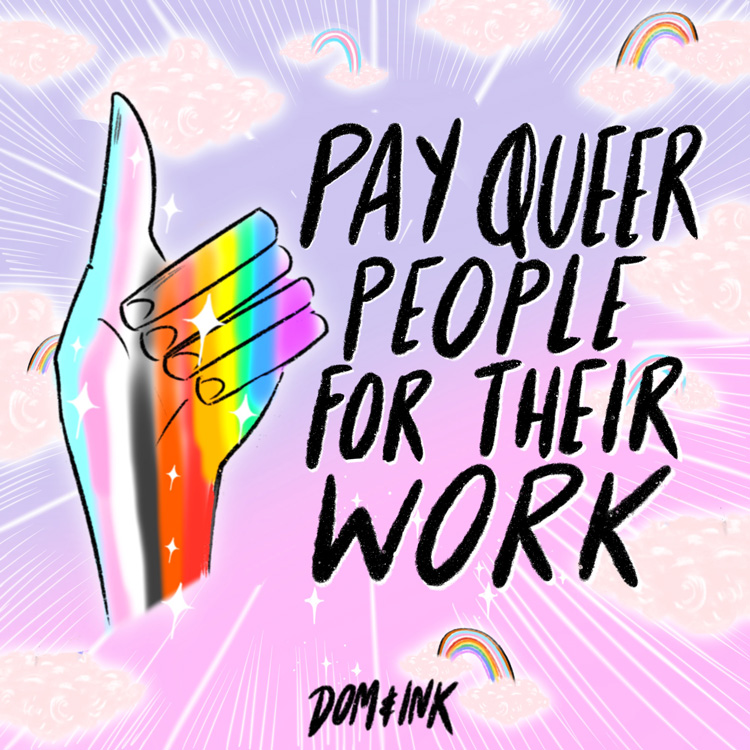