As I’m used to seeing Somerset House’s many wings covered in international war photography and ceramic pots, it certainly feels like the rooms have been injected with colour and life when you see them adorned with a diverse and eclectic selection of still and moving installations. 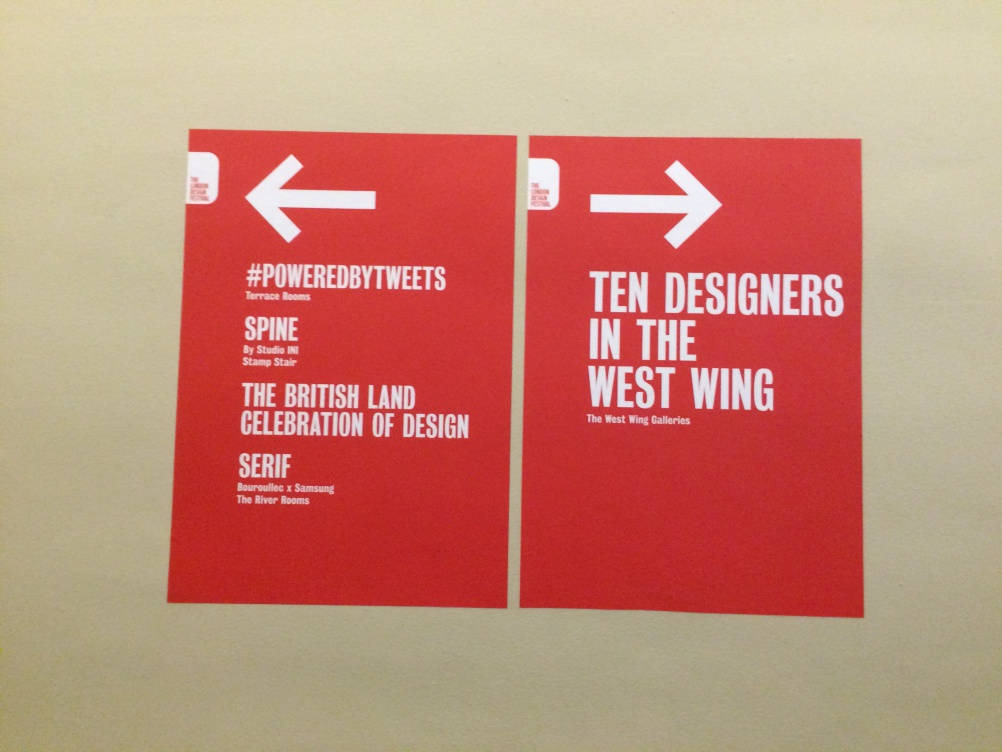 The London Design Festival exhibits are split between a selection of rooms spread across Somerset House, and the West Wing of the venue, with the latter giving up ten rooms to different designers, and the other areas devoting more space to a cherry-picked few.

Placed in the River Rooms is the obligatory big technology product launch – but its design is also subtly smart. Looking front-on, Samsung’s new Serif TV, designed by French brothers Ronan and Erwan Bouroullec, looks like a stylish but simple block colour rectangular screen – but when viewed in profile, it neatly spells out a capital serif “I” shape, a quiet nod to the typographers in the room.

#PoweredByTweets is the venue’s first ever Twitter exhibition, and contains a series of creative and heart-warming uses of social media – there’s the hooked-up typewriter which scans the entire Twittersphere for words used in Alice in Wonderland and then rewrites the whole novel. There’s also the colourful glass installation which drops red liquid into a container every time someone Tweets about it, these metaphorical “blood droplets” being part of a campaign to highlight the unjust law that bans gay men from becoming blood donors. The exhibition space brings Somerset House into the digital age. 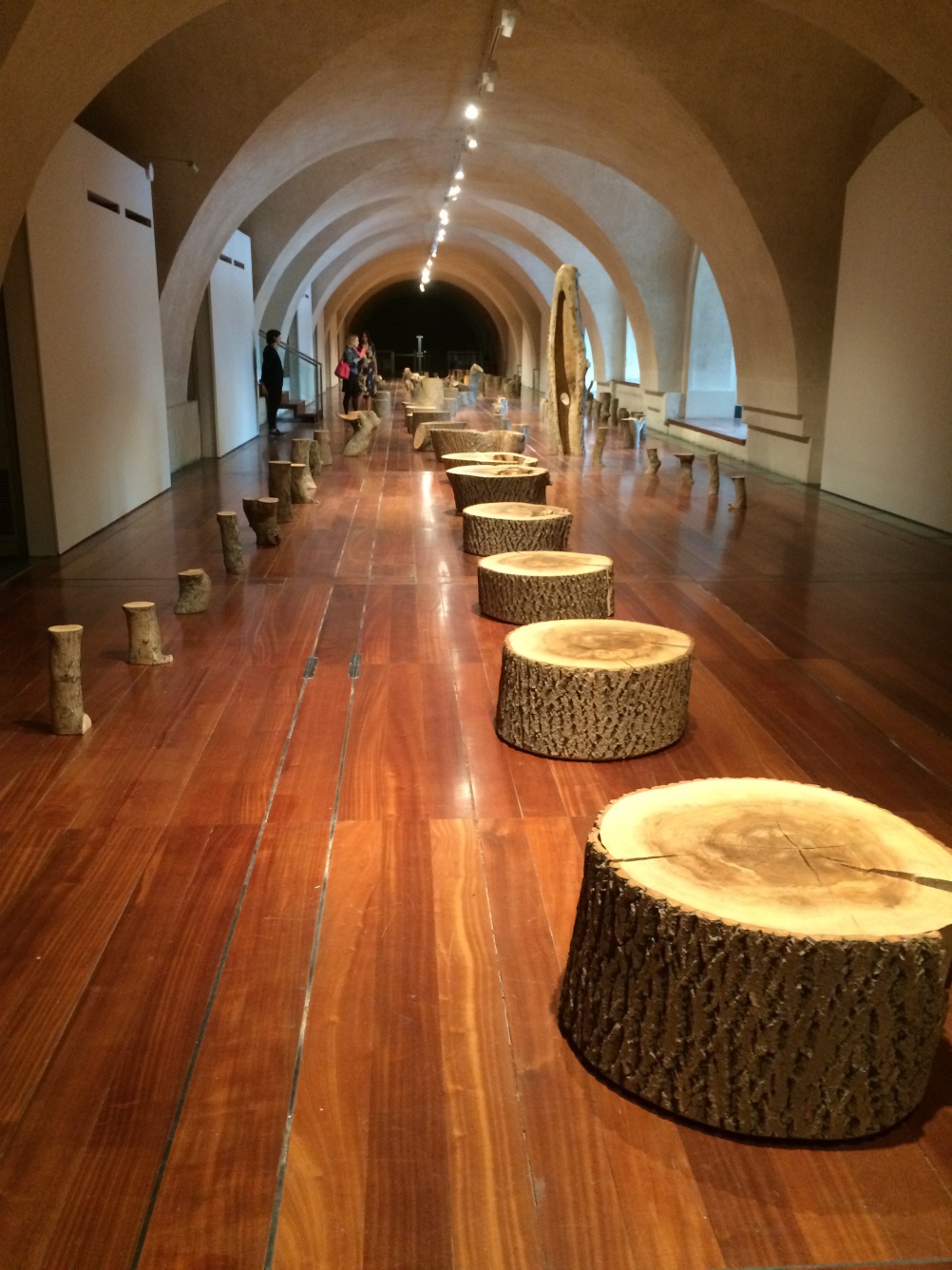 Furniture designer Max Lamb’s “My Grandfather’s Tree” is a complete contrast. He’s created his rustic wooden furniture out of an 187-year-old ash tree on his grandfather’s land (don’t worry, it didn’t die in vain – the tree had been struck by lightning and was already close to falling down). Having acted tree surgeon and chopped the tree into 131 logs himself, Lamb has then sanded, oiled and preserved them to create unique stools, tables and chairs – probably best-suited to home décor that embraces the natural.

“I didn’t want to lose the identity of the original form,” says Lamb, as he crouches beside a log and demonstrates counting the number of rings in its core to gauge its age. “We’ve given the tree life through cutting – by killing it, we’re making it last longer.” These bits of tree don’t come cheap, either – Lamb is looking to sell them during and after the exhibition, and they range in price from £100 for your small basic log to £14,000 for your more elaborately gnarled, grandiose wooden sculpture.

The West Wing is rammed full of design work spanning minimal through to pretty spectacular. At the minimal end, lies the launch of the sleek MP 01, the new back-to-basics mobile phone, produced by technology brand Punkt and designed by Jasper Morrison. Priced at around £230, it can make calls, send text messages…and that’s pretty much it. Aimed at 35-45 year-olds who want a second phone detached from cyberspace, the product is meant to fit neatly into the background. “It’s not meant to demand a lot of attention,” says Marcia Caines, head of brand communications at Punkt. “Sometimes it’s better to take off than add on.”

Edward Barber and Jay Osgerby’s “reading room” feels like a den of tranquillity compared to some of the more outrageous LDF exhibits. The space has been filled with furniture created by the pair, with copies of their new book One by One available for visitors to read. Alongside Nendo’s simple “nest shelf” installation, it provided some well-needed respite from the jostling crowds, which seemed to be steering more towards the louder, brighter rooms.

But at the outrageous end of the spectrum, sits an installation designed by consultancy Assemble, promoting a new range of lamps. The Alphabeta, created by Hem retail store and Italian designer Luca Nichetto, is split into modular parts, and can be customised in colour and shape. It lends itself to a child-like playfulness and creativity for the buyer, who can essentially “build” their own lamp.

Fittingly, the installation sees a lively joining of colour, light and sound, as the 88 keys of an electric self-playing piano are hooked up to 44 lamps, with the low keys connected to dark-coloured lamps, and the high keys connected to bright-coloured lamps. A unique light display is created as the piano plays a song – and it’s particularly enjoyable to see a sombre tune hammered out by the ghost pianist to an appropriately dusky light display, while an upbeat song spurs on a UV-inspired rave. It definitely brought the launch of a new light range – not often the most exciting design news – to life.

At the pinnacle of the viewer experience was the virtual reality trial, which I’m sure will be seeing endless queues of eager first-timers (like myself). Though only a few minutes long, Tino Schaedler’s and United Realities’ collaborative project convincingly transports the user into space for a short trip. Having to sign my life away on a health and safety waiver before taking part did mean I was slightly underwhelmed when I wasn’t thrown from my pod upon take off. But the short experience provided amazingly clear views of the “galaxy”, and will give many people a one-off insight into this exciting technology – alongside providing them with a hilarious and mildly embarrassing keepsake of themselves aboard the “space shuttle”…

A mix of calm and manic, colourful and demure, this year’s Somerset House LDF exhibits are a multi-sensory experience – whether you’re obsessed with social media or virtual reality, or simply want to peruse some sleek and minimal product design, there’s something on show to suit. You’ll be left feeling intrigued and inspired – let’s just hope you’re not out of pocket after accidentally purchasing a Max Lamb-original log, a new stylish brick-phone and a virtual reality headset.