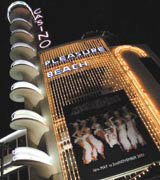 Blackpool Pleasure Beach has appointed London consultancy Johnson Banks to overhaul its corporate identity. The review is the first in over a decade for the Lancashire theme park and follows two years of research and consultation.

Johnson Banks was awarded the five-figure project following a credentials presentation against one London and one North-West consultancy, says creative director Michael Johnson. The group has now begun work on the identity for the project.

‘We are talking about a route which, if it goes through, would be very innovative,’ says Johnson. ‘Mostly, these theme parks have a very similar kind of identity and haven’t really considered a house style.’

The review of the Pleasure Beach’s visual language aims to retain the historic elements while also appealing to the next generation of visitors. Many of the park’s buildings date from the 1930s and it is still home to three traditional wooden rollercoasters. ‘We’re going to try and find something that picks up on the heritage of the park but propels it into the 21st Century at the same time,’ adds Johnson.

‘We’re hopeful that the result will be a style that can work all the way from logos to lollipops,’ she adds.

â€¢ Opened in 1896 by William Bean, based on American amusement parks