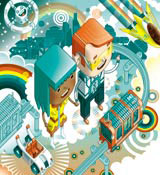 So what happened to the future? Everything was going just fine in the early 1950s, even though most of London was still flattened under a shroud of ash and broken bricks. The Eagle comic was feeding us a diet of Stories from the Bible and Dan Dare – Pilot of the Future. Even in the icy grip of the Cold War, we all found time to look with thrall and optimism into the future. Men went to the moon and back, Teflon and Velcro changed our lives (as had nylon and cellulose before them) and although life wasn’t exactly unremitting fun, it had an underpinning mantra: things were getting better.

And then suddenly it stopped. I’ve been trying to isolate the moment when it stopped for ages. Now, I think I’ve finally found it: 1 January 1974, for those of us living in Great Britain anyway.

The ‘three-day week’ showed us that we could no longer be considered world-class. We’d finally lost the ability to build big, exciting aeroplanes; Blue Streak, our own, much-vaunted nuclear delivery missile was a dead duck, our railways were screwed and we couldn’t run a bath. We suddenly realised we were crap.

A couple of years previously people had run, screaming, from the initial screenings of A Clockwork Orange, claiming that such a barbaric vision of a future Dystopia couldn’t possibly happen. Now the news slowly began to reveal that Little Alex’s ultraviolence was a hideous, creeping reality.

Then came several global depressions, the end of the Space Age, shrinking ozone layers, aeroplanes being flown into buildings, Uncle Sam playing up, Global Warming and, bingo, here we are. Comprehensively screwed and wondering what we’re doing here.

We just don’t seem to be able to shake off this maudlin streak in Europe. The French, though, are an exception.

France has a highly developed adult cartoon culture, fuelled for a good 30 years by the brilliant foresight of the likes of Bilal and Moebius (Jean Giraud), both graphic novelists from the crucible of modern social imagery: Metal Hurlant. And it is in this unlikely medium that France’s ‘optimistic futurism’ is at its most obvious. Certainly, it has its dark moments, but hidden within the pages of your average French cartoon you’ll find a core of ebullient humanism trying to get out. It’s something we all need to see.

Designers cannot be, by definition, pessimists. It just doesn’t go with the job. We’re supposed to be defining the future, aren’t we? Creating the kit and the buildings and the dÃ©cor that everyone is going to need when they get there. If we can’t see the world as a better place to live in, then what chance does anyone else have?

It’s exciting listening to genuine design optimists, like Apple Computer’s Jonathan Ive, talk about how things are going to get progressively better. Easier. Faster. Simpler. Yummier. Gordon Murray is another example – he has been waxing lyrical about how he’s left McLaren to ‘sort out city mobility’. Likewise, Tom Heatherwick has been giggling like a schoolboy because he’s turned a bridge into a living, breathing piece of delight in front of yet another haughty Richard Rogers glasshouse. It’s exciting because I believe them. And I appreciate the fact that these people are handling big, complicated issues which affect all of us, not running away into a corner to design yet another salt and pepper pot.

And in this post-convergent world, we can fix a lot of the stuff that didn’t serve us well before. We can make sure that crap such as impossible-to-programme VCRs don’t happen again. We can connect ourselves to virtually anyone around the planet, for any number of reasons and for a fraction of the price. We can make shopping a less frustrating experience for disabled people. We could even convert a bus system into a book-your-seat personal limo service.

We can do almost anything we can imagine now, if we put our minds to it. Which puts us squarely in the same position as our forebears were in the early 16th century, a new age of technology and capability stretching out in front of us.

So now it’s no longer down to what we can do – it’s about what we should do. And that takes more than just imagination, it takes wisdom. For instance, distributing power generation to the point of use, such as in the infrastructures imagined in the Hydrogen economy, could utterly revolutionise the way we live.

It doesn’t have to be done all at once. We can do it a bit at a time and still win. Even tiny changes can make a phenomenal difference. In New York State two years ago, five schools got together to see what impact the tiny, folding, kids’ scooter had made to school trips. They calculated the fuel saving over a year, where Mom wasn’t taking junior to school in the sports utility vehicle, but walking with him scooting his steed instead. They made a phenomenal discovery. Over only five schools, the fuel saving was a phenomenal one million gallons of gasoline, almost enough to drive a VW Lupo to the sun.

There’s nothing on the planet that can’t be made just that bit better (rather than just that bit different). But before you do it, you need to have an idea where you want all this to go, a vision of the future, with a set of stepping stones to enable you to move from now into the future in an effective and efficient way. Dan Dare did this beautifully in the 1950s and 1960s, portraying a Utopian future with recognisable ’emotional signposts’ along the way. The Mars rocket in this picture is surrounded by battered leather suitcases with ‘Mars’ stickers on them. That’s not because Hampson lacked the vision to imagine the luggage of the future, it’s just his little way of saying: ‘It’ll be everything you dreamed of, but with all your favourite stuff still there.’

And that’s what we should be doing: leading the way by visualising and articulating achievable futures that get us out of this hole.

I’m pretty sure Apple doesn’t call itself an optimistic futurist, but that’s exactly what it is. Apple chief executive Steve Jobs has some great one-liners. On consumer research he says: ‘It’s not the consumers’ job to know about the future. That’s my job.’

Jurassic corporations need to learn from the mammals. The secret of the ‘next big thing’ isn’t lurking inside the ‘consumers’ head, waiting to be liberated by some well-paid focus group. It’s inside the heads of the dreamers, the futurists, the Utopians. You and me.

And sometimes we get knocked-back by the bean counters who tell us we’re wrong and that the consumer is always right. Or by the supply chain, which says it can’t be done. Or by the managing director, who can’t see further than his own middle-age spread.

But the difference is that we’re the ones with the imagination to see beyond what things are, which is why we applied for art college in the first place, rather than Accountancy or English Literature.

If I wake up and design a bad poster for hair gel, who’s going to care (other than the client). If I design a bad train, though, I’m going to visit a trillion devils on thousands of people for years to come.

We designers hold enormous power. And with it comes responsibility. Wield it imaginatively and wisely. Or fuck off and do something less dangerous. l

Richard Seymour is a partner at Seymour Powell