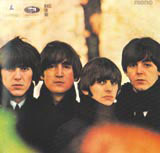 You couldn’t ignore them could you? The Fab Four continue to grab our attention (41 years later in the case of this album cover) and if you are in any doubt check out Mojo magazine, which seem to have them on its cover every other month. I know Sgt Pepper’s is supposed to be the definitive cover and, indeed, Beatles album of all time, but I was never that knocked out by it – while realising the concept was light years ahead it seemed let down by the way the set was photographed; like the cutouts, it appeared to be as flat as a board.

But not Beatles for Sale. I was fascinated by photographer Robert Freeman’s rich autumn colours, their black coats, their black knitted scarves. I was wearing a dark blue school mac, short trousers and the only knitted scarf I had was the one my mother knitted in Newcastle United’s colours with the players’ names niftily spelt out in the black and white panels – nifty, but I bet Paul didn’t pull Jane Asher wearing one.

I actually bought the album when I was about 15 and hopefully out of the short trousers, but still in the mac and dubious scarf. At that age I was hopelessly in love with some girl whose name I can’t remember. Maybe I didn’t even have a girlfriend I just wanted one and used to picture myself singing track 12 – ‘I don’t want to spoil the party so I’ll go, I would hate my disappointment to show…’. Happy days.

It’s time to address the faults in the pitching process