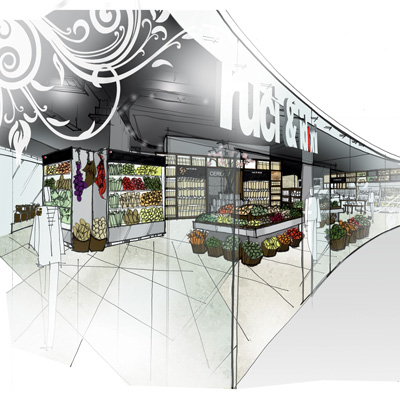 Cada Design Group is due to open an Indian office in Hyderabad Cada Designs Evt which will work alongside its architectural affiliate Dexter Moren Associates.

The consultancy has previously created the concept for luxury Indian supermarket chain Ruci & Idoni (pictured), and provided concept designs for food outlets within the newly opened terminal of Delhi Airport in 2009.

Cada co-founder David Callcott says, ’Setting up in a country like India isn’t easy as you have to go through so much red tape having that sort of Indian representation there makes it an easier passage.’

Cada is currently working with Dexter Moren on developing a new hotel brand in India and has put in a fee proposal for the refurbishment of a shopping centre.
Initially, a team of about five local staff, including a graphic designer, three architects and one interior designer, will staff the office.

At this stage, all concept work will be created in the UK office, with detailing work and project management undertaken on the ground in India. There are currently no plans to move UK staff to the India office.

’India is an emerging nation. There’s an awful lot going on there,’ says Callcott.

It is hoped that the office will open in May or June.