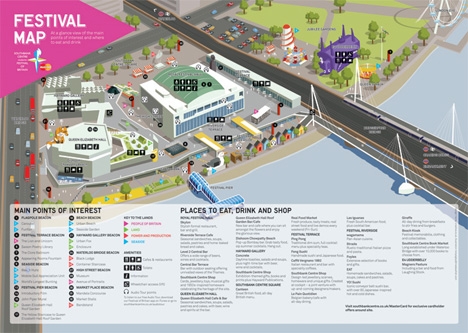 Honey Creative has created the souvenir guide for the celebrations to mark the 60th anniversary of the Festival of Britain.

The Southbank Centre in London is hosting a series of events from 22 April to 4 September to commemorate the 1951 festival.

Highlights will include exhibitions of John Piper’s The Englishman’s Home mural, made for the original festival, as well as two panels from Feliks Topolski’s Cavalcade of the Commonwealth mural.

]Tracey Emin’s Love is What You Want exhibition will be held at the Hayward Gallery from 18 May to 29 August in conjunction with the festival.

Honey was appointed in late January to work on the guide, having had a long-standing relationship with the Southbank Centre, according to Honey creative director Matt Purkiss-Webb.

The consultancy was tasked with creating a souvenir guide to celebrate all the activities and showcase the highlights, as well as acting as a guide for all the people visiting the event.

Purkiss-Webb says, ’It’s very much a design-led guide, helping them to celebrate the event.’ He says, ’There’s a theme running through the festival site, which we’ve picked up on it isn’t retro, but it’s a modern interpretation of the original festival.’

He says the guide (map spread pictured) uses the same typeface and colour scheme as the wayfinding and other material around the site.

Purkiss-Webb adds, ’We wanted to make the guide accessible to a wide audience. Millions of people will be visiting the celebrations and we wanted the guide to have an engaging story for them.’

The guide will be available from Friday and will be on sale for visitors to the Southbank.